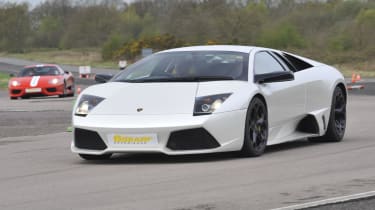 I reckon it took around three minutes for the grin to reappear on my face after collecting LP07 from its recent makeover at the paintshop – and about an hour before I was speechless with fury, having taken the nearside wing mirror off while reversing into the garage. Again.

A sheepish call to Lamborghini Manchester had the LP640 looking as good as new within 24 hours, albeit with an extra bill for almost £1400. Frustrating just doesn’t begin to describe it. Still, the big Lambo looks its best again now and I reckon the newly repainted gloss-black wheels contrast well with the pearly white paint.

The next job was to replace the huge steel discs, as a combination of 18 months’ road and track use had resulted in a myriad of small cracks emanating from the drilled holes. A set of four discs from Lamborghini comes in at around six grand – not an amount I’d be happy shelling out – but a bit of detective work by LP07’s co-owner uncovered some Brembo racing discs, which are grooved not drilled, complete with new hubs for just over £2000. Much more agreeable. With some new Pagid ‘Blue’ road/race pads the total bill came in at £2350, and the result is a touch more bite to the Murciélago’s stopping power and, of course, no possibility of cracks reappearing. Having said that, I can’t help wondering if it would have been better to have specced the car with ceramic discs…

I’ve noticed recently that the Lambo’s oil pressure seems to be very low, the red warning light even appearing momentarily at idle after periods of sustained hard driving. My previous Murciélago long-termer had the same problem and the cure recommended by Lamborghini then was a thicker oil (Racing 4T 20W-50) made by Agip. After tracking down Agip’s UK stockists again (Moto World, 01992 464199), I’ve put the same oil in LP07 and it seems to have cured the problem here too.

With sunny weather hopefully just around the corner, the LP640 should soon be clocking up some serious miles again, including a trip to Le Mans. The Lambo is a surprisingly comfortable long-distance cruiser, and with a boot large enough to squeeze in a couple of tents and more than a few beers from the local Carrefour once there, the trip to la Sarthe should be fun!