The Diablo was born at a time of turmoil for Lambo, but it came right in the end 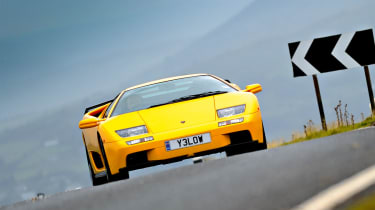 Like the Miura and Countach before it, the Diablo was an end in itself, the antithesis of humdrum and mundane, pure and uncompromised in its ability to thrill. It wasn’t an exercise in subtlety. But its development wasn’t always straightforward.

Work had begun in 1986 and continued for the next four years. Early prototypes ran a mechanical four-wheel-drive set-up but it was crude and unreliable and the first production cars would revert to  rear-wheel drive.

Lamborghini’s new flagship simply had to be right. It had to move the game on from the Countach, and its chief weapons would be a more powerful engine and stronger brakes. With 492bhp, it was the world’s fastest production car in 1990, hitting a verified top speed of 202mph. In one sense, job done. The Diablo had the style (courtesy of Marcello Gandini, naturally) and it had the speed.

But it was also pretty hard work, especially its unassisted steering. The VT version of 1993 brought four-wheel drive but, perhaps even more significantly, power steering.

The thing was, the Diablo’s further development coincided with a turbulent time for Lamborghini the company. In 1987 it had been bought by Chrysler, then in 1994 by unsympathetic new Indonesian owners. Salvation came in the shape of Audi, who bought the company in 1998.

The final iteration of the Diablo, the 6.0 – the first to showcase Audi’s engineering input – was dynamically polished, better even than the ‘pure’ Italian cars. Its engine was treated to variable valve timing and completely new calibration that made it a puppy dog at low revs but allowed it to remain a salivating psychopath at the top end. It was completely captivating. Not only had Lamborghini blossomed under Audi but somehow managed to become even more unhinged.