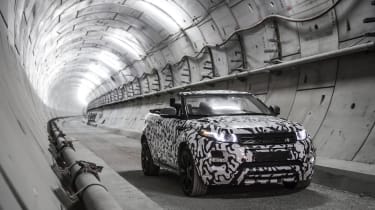 Land Rover has confirmed that it will put a convertible version of its hugely successful Evoque SUV into production. The drop-top model will build on the popularity of the existing five-door and three-door fixed-roof models, which have found 400,000 homes since 2011.

The company first showed off a concept version in 2012, but on the eve of this year’s Geneva Motor Show, Land Rover Design Director Gerry McGovern announced that it will be built.

The Evoque Convertible, due to go on sale in 2016, will be the first cabriolet in the premium SUV market. As McGovern admits, it will be ‘an image vehicle – but one with substance, too.’ It will be built on the current Evoque production line in Halewood, UK.

Land Rover has released a video of a camouflaged Evoque Convertible apparently being tested beneath the streets of London in the Crossrail tunnels.

Further details will be revealed later this year.