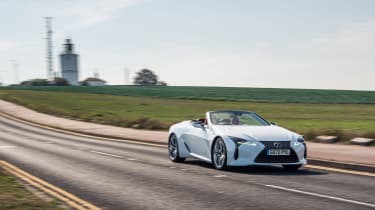 The Lexus LC500 is quite the idiosyncrasy in the contemporary Lexus range. As the brand continues to move away from its dynamic aspirations by losing its rear-wheel drive IS, GS and RC model lines, the LC500 stands out as a V8-powered coupe, and now convertible, with concept car looks that sits above a range it seems almost entirely disconnected from.

But while the LC500 might be out of step with Lexus’s current ambitions, it’s not a car to be underestimated as it remains one of the most distinctive and interesting new cars on sale. For the 2021 model year Lexus has released a new convertible variant and applied a range of updates across both body styles to smooth out some of the previous coupe’s rough edges and make it fighting fit to compete in the era of the 992 Porsche 911 and BMW 8-series. For now we’re driving the LC convertible, which Lexus is hoping will expand the appeal of the range without compromising what makes the coupe such a fascinating sports GT. 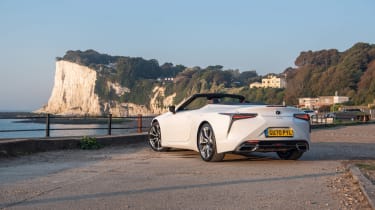 Lexus will only offer the LC500 Convertible with its 2UR-GSE atmospheric V8 and not the hybridised V6 that’s also found in the coupe. While its on-paper figures look impressive enough: 457bhp at 7100rpm, the V8’s relative lack of torque (391lb ft) means this is not a fast car in context of rivals. It’ll reach 62mph in 5sec dead, which is quite substantially down on pretty much anything similar from Germany but in the Lexus, especially when it’s configured as a convertible, we’re not entirely sure it matters.

The ten-speed automatic gearbox is the same unit as before, but has been given a software overhaul to improve the shifting characteristics of all those ratios. Despite the excessive amount of gears to choose from, the ratios aren’t quite as short as you’d expect, instead you get what feels like a stack of redundant gears at the top end of the transmission.

In manual mode, the shifts up the gearbox are fast enough, if not quite as crisp as the best ZF boxes used in German rivals, but by contrast the downshifts are almost laughably aggressive and elicit a definite chuckle every time you pull the paddle. 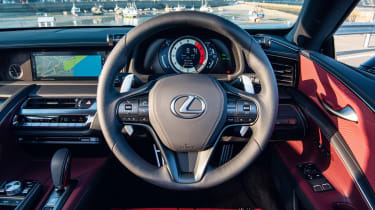 While the changes to the 2021-model year LC are subtle, they have been acutely focused on specific hardware elements that do make a substantial difference. This starts with the double wishbone front suspension, which has been enhanced with the fitment of new forged and hollow-cast aluminium components that reduce unsprung weight by 10kg.

The convertible body has needed some work to maintain rigidity, with new bracing underneath the A- and B-pillars, a new tower brace above the rear suspension and some strengthening braces along the chassis floor. These new components come at a cost, namely the 105kg weight penalty over the coupe that takes the convertible to a hefty 2035kg

The folding roof’s packaging requirements have also meant the loss of the coupe’s rear-wheel steering system, but given the Convertible’s more relaxed demeanor, this isn’t a big loss. The LC’s basics are otherwise unaffected; it’s still superbly built inside with fabulous materials, refinement is exceptional, the seats and seating position are brilliant, and the stereo top notch. 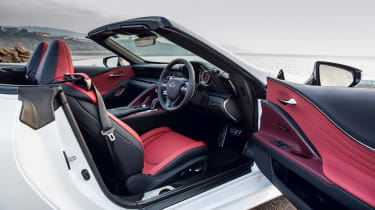 One can’t help but be drawn into the theatricality of the LC: the concept-car looks, superb cabin and the shrill whine of the starter motor waking up that sonorous V8 engine. It’s always surprising to remember that this is in essence a Toyota, albeit an expensive one.

The LC immediately feels resolved in a way the previous model year cars didn’t, with an appreciable improvement in ride quality and wheel control. Despite the 21-inch wheels, the Lexus LC500 Convertible rides with superb sophistication, gliding over sharp road intrusions with impressive wheel control. There is a hint of scuttle shake with the roof down over the roughest of surfaces, but it still has more composure than the previous LC and feels more connected to the surface than something like a BMW 8-series. 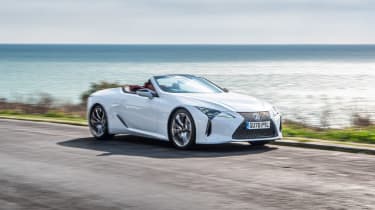 Turn up the pace and the LC500’s 2035kg kerb weight certainly doesn’t disappear, but there’s still a playfulness to the chassis that’s encouraged by the deftly-calibrated limited slip differential. The relative lack of torque makes it an easy car to drive at any speed, and the steering gives you more confidence than racks you’ll find in modern BMWs or Audis, although it does lack the precision of a 911 or Aston Martin Vantage.

Get into a groove with the LC and it flows beautifully; keep the engine on the boil, enjoy its barks and grumbles as you rip up and down the ratios, pour the car into bends and slyly overdrive the rear axle. It’s a great GT, but does lack the coupe’s agility and ultimate precision.

Don’t mistake this for inability though, the coupe’s balance and playful energy is still there, but the convertible has a different character, lacking lateral support when being pushed and stopping short of feeling comfortable when driven closer to the limit. The brakes are strong enough to handle the mass on the road, but the pedal is too long and soft, speaking to the car’s cruiser character to the detriment of high-speed confidence. 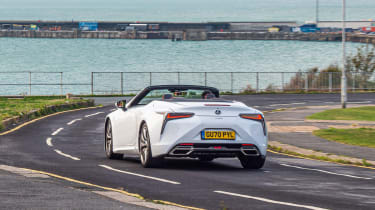 The LC500 Convertible is available in two trim levels starting at £90,755 for the entry-level car and rising to £96,625 for the Sport Plus. Both versions are extremely well equipped, as you might suspect, but it’s the specialised components that make this feel like a real halo product and not just an expensive Lexus. Elements like the beautifully damped volume knob, intricate interior door handles and even the glovebox release feel superb, beyond Bentley levels of luxury even, and in a less overtly obnoxious way.

Rivals naturally verge on either side of the LC in both the GT and sports car space, with Porsche’s 911 Carrera Cabriolet PDK closest in price and package. At £92,959, a basic 911 will be pretty stark in terms of equipment, and it is quite substantially down on power, but thanks to its traction, torque and PDK box will still destroy the Lexus in a straight line. It’s also the more resolved handling package, but if your 911 Cabrio is being bought on the premise of posing rather than poise, you could do much worse than to consider the Lexus as a more glamorous and charismatic alternative.

The Aston Martin Vantage Roadster is a more expensive and dynamically aggressive proposition at £126,950, but matches the drama and exoticness of the Lexus. At the other end of the spectrum is BMW’s M850i Convertible which has marginally more rear seat space than the Lexus. At £109,485 it’s expensive, and perhaps shares one too many interior bits and pieces with a 320d, but it’s fast, knocking a whole second off the LC’s 0-62mph time. What it lacks is drama, something that Lexus has been able to instill within the LC’s package to its very core. There are better GTs and better sports cabriolets for sale certainly, but few are as distinctive, feel-good or satisfying. 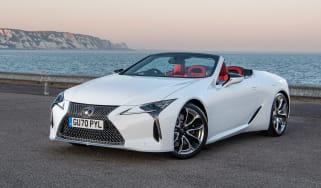 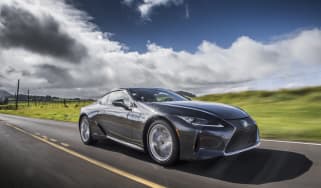