More GT than sports car, but those swayed by the RC's looks will find it a stylish, swift and relaxed car to live with 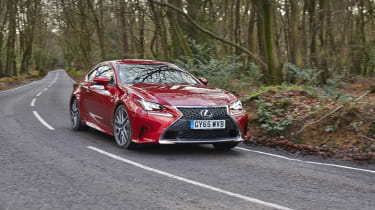 The Lexus RC 200t is an entry point into the Lexus coupe range, based on the IS platform and sitting below the V8-powered RC F. In F Sport trim, it's also designed to be a little sharper than the standard RC - think of F Sport as Lexus's equivalent of BMW's M Sport trim or Audi's S line models.

The 200t is powered by a 241bhp, 258lb ft 4-cylinder turbocharged petrol motor. Drive is sent through an eight-speed automatic to the rear wheels via a Torsen limited slip-diff.

There is also a drive select mode, with four options to tweak the adaptive suspension and throttle responses. It will crack 143mph and 62mph in 7.5sec, which is on par with BMW’s less powerful (184bhp) 420i M Sport, a result of the RC’s portly 1675kg. 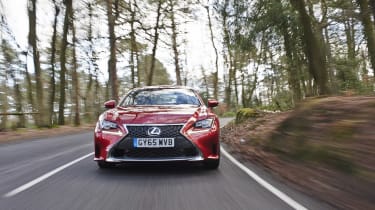 The RC 200t's 2-litre powerplant features a host of advancements in order to hit modern performance and efficiency goals. It uses both high-pressure direct and low-pressure port fuel injection to optimise combustion regardless of temperature and load, while Lexus's latest variable valve timing technology allows the engine to switch between Otto cycle combustion, and at lower loads, the more fuel-efficient Atkinson cycle - the latter previously used only in Toyota and Lexus hybrid models.

There's clearly some way still to go in terms of efficiency however - at 38.7mpg combined, it does 3.5 fewer miles to every gallon than a similarly-powerful BMW 428i M Sport.

If you find the angular exterior busy your view won’t change when you get inside. Angles dominate the design, but nothing is too jarring and ergonomically it all works, while the LFA-inspired instrument dials mark it out from regular RC 200t trim models.

The RC 200t F Sport doesn’t do anything that grabs you by your ears and screams in your face “DRIVE ME!” but it does slide into your life with unexpected ease. The four-cylinder motor answers the criticism of the RC F’s V8, in that is has some low down torque, all of its 258lb ft is there from 1650rpm (the V8’s 391lb ft doesn’t arrive until 4800rpm) and the RC is all the better for it with no need to rev the life out of it to get on with things. Progress is swift rather than electric, but the ‘box is never flustered and the paddles on the back of the steering wheel are all but redundant because of its intuitiveness.

There’s no feel to the steering, but it’s direct which helps with placing it in a corner. The ride on our car’s standard 19-inch wheels is better than any German equivalent and the chassis is set up for neutrality rather than thrills. The fly in the ointment is the body control - hit a bump mid-corner and the shock is telegraphed across the car, unsettling the composure it had demonstrated so well up to then. 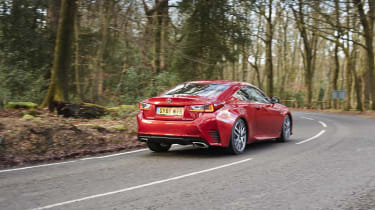 It’s not a sports car in the natural sense, but like its V8 cousin the RC 200t is an appealing alternative to the predictable German rivals. It’s never going to get you out of bed early on a Sunday morning for a spirited drive, but if it is your everyday car you’d find little reason to complain.

If you're prepared to wait, Infiniti will soon offer a rival in the shape of the Q60 coupe. Performance figures and pricing haven't yet been confirmed, but the Q50 saloon with the 2-litre turbo hits 60mph in 7.2sec, which should make the Q60 a close rival for the Lexus. 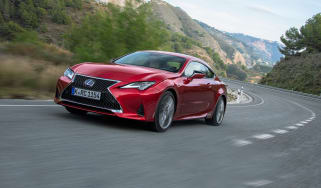 Lexus RC 300h review - how does it compare to the C-class?

Lexus’ sporty coupe looks sharp and drives tolerably, but is a better GT than a sports car
Visit/lexus/rc/20764/facelifted-lexus-rc-pricing-and-kit-announced 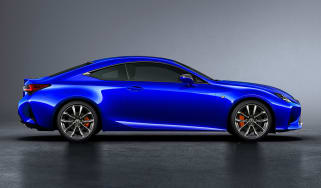 The Lexus RC, Japan's rival for the BMW 4-series and Audi A5 rival, refreshed for 2019
Visit/lexus/rc/20872/lexus-rc-300h-f-sport-black-edition-announced-ahead-of-geneva-reveal 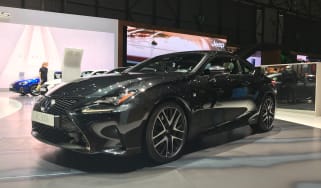 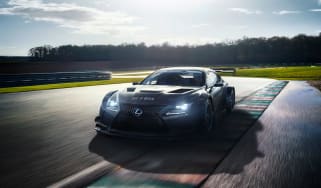