VIDEO: evo's new trackcar heads out on track for the first time. How's our Radical Clubsport on circuit? 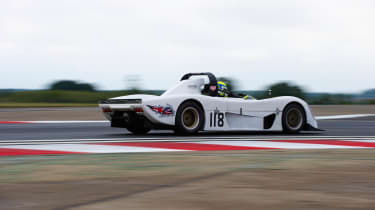 8
Two corners into my first drive in the Radical Clubsport that I bought with Roger Green last month, I found myself thinking, ‘What the hell have I done?’ I was at an evo trackday at the Bedford Autodrome and the car felt awful – really, really awful.

Subscribe today to have every issue of evo delivered straight to you. You'll SAVE 39% on the shop price, and get evo for its original cover price for a whole year!
Subscribe now
The steering seemed broken, the car had a hitherto undiscovered type of understeer, and despite the seller promising that the exhaust produced 105 dB, it failed the noise test with a shouty 108 dB. However, all was not what it seemed…

The car did indeed fail the static noise test, but the guys at Bedford offered to take the car on track to find out if it would fail the all-important drive-by limit. It didn’t – so we were let on track. A very wet track. On slick tyres. Old slick tyres.

I’ve never experienced anything like it. The Radical didn’t build lateral G then release it slowly in a controlled understeer slide. Oh no, when I turned the wheel it felt like the tyres were suspended above the tarmac – they simply swivelled on their contact patch and generated zero steering effect. And occasional hyperventilating from the driver.

Back in the pits, Roger, myself and our spannerman for the day (thanks dad) switched the slicks to wets and ‘Fireball’ Green went out for a play. Just before he drove out, he noticed that the steering wheel was not correctly inserted on the column – which solved the mystery of why the steering felt broken…

An experienced Radical racer, Roger soon picked up the pace and came in after ten minutes with a huge smile on his face. ‘The engine is really strong, the gearbox is fast and light and the balance pretty good out of the box. It’s difficult to get a proper feel for it in these conditions but with some set-up work it’ll be even better.’

Then it was my turn again. Roger had got the grooved tyres really hot, but I was still nervous, so they cooled noticeably after a couple of my slower laps. I gathered my thoughts and decided the only way I’d get a feel for this little car was to pick up the pace. Five laps later the wets warmed up considerably and I started to understand why Radicals generate such a loyal following.