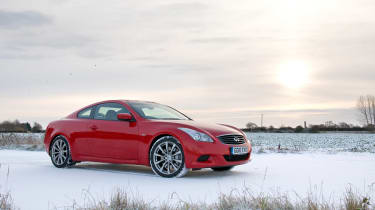 Perfect timing. There was less than a week between our G37S being fitted with winter tyres and the snow arriving. Probably for the best, too. Much as it was amusing the way the Infiniti’s rear Bridgestones would spin up on wet roads as if they were attached to some 500-odd-bhp AMG Mercedes, I didn’t fancy their chances at all on the white stuff.

Fortunately, Infiniti communications director Wayne Bruce had clearly been thinking along similar lines and had suggested we might like to try a set of Dunlop SP Winter Sport 3D tyres on GG10 EVO. It sounded like a good plan to me.

While our G37S Coupe was away having its new rubber fitted, I got to try a G37 Convertible for a couple of days. As a big fan of drop-tops – and, it must be said, of our Coupe – I was quite excited about getting to try this version of the G37, even though the weather wasn’t exactly conducive to long stretches of roof-down motoring. This proved particularly unfortunate as it turned out, because while the Convertible looks smart with its folding metal roof up, the constant squeaks and creaks that it emits when in this position are rather off-putting. And the less said about the shuddering of the steering wheel and rear-view mirror, the better. A bit disappointing, then, but at least it confirmed that the fixed-roof car is the one to have.

Especially, I now know, on winter tyres. Thus equipped, our Infiniti not only shrugs off snow, but has vastly improved traction on cold, wet tarmac. The rear end’s twitchiness has been tamed to the point where it now only gets loose when you’re deliberately seeing how far you can push it, and even then the breakaway is so gentle that the tyres usually find grip again before the ESP gets involved. It is, I reckon, spot on.