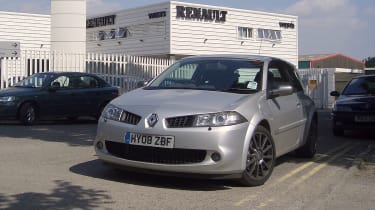 There had to be a catch to all the economical motoring our diesel Renaultsport Mégane provides, and I’ve found it: servicing costs. The petrol-powered Mégane Trophy Andy Morgan ran on our fleet a couple of years ago had its first service at 18,000 miles, at a cost of £188, yet our dCi 175 has just had its first service at a mere 12,000 miles with a bill of £266. So, mile-for-mile, servicing costs are doubled with the diesel. Mind you, it’s not that big a deal when you’re seeing the right side of 40mpg on a regular basis – you’ll still be around 700 quid better off every 18,000 miles.

It was West’s Garage Cambridge who looked after Andy’s Trophy and it was there that I took our 175, leaving it with them for a couple of hours during which they agreed they could carry out the service. In fact they hadn’t quite finished when I returned on time, but at least they had a good excuse: refilling the dCi engine with oil is a slow process because it has to be poured down the small hole used by the dipstick. No, I didn’t believe it either – until I checked the handbook and looked under the bonnet myself. Weird.