Our spell with the Megane's sadly over. The combination of attributes is unique, and compelling 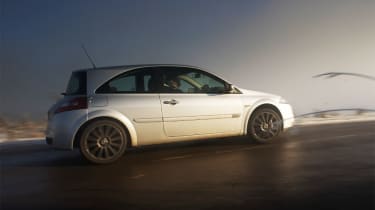 It left this morning, reclaimed by Renault from where it will now enter the giant fleet-disposal sausage machine.

‘Let me just note down the trip meter reading,’ I said.

‘Wow! Fifteen miles! Is that all you’ve done in it?’ the collection driver said.

‘No, that’s how far I’ve been since I filled it up so we could take a picture of the remaining range. Actually I and various colleagues have covered 14,122 of its 16,702 miles,’ I didn’t quite say.

Said trip-meter photograph shows the mileage potential of that last 60-litre tankful as a not overly optimistic 510 miles. Now you see a key reason why I preferred the Renault to the dipsomanic, approximately twice-as-thirsty Evo X.

HY08 ZBF (I still can’t get used to seeing Zs in non-Irish number plates) arrived at Evo Towers last April and instantly found itself locked in a twin-test confrontation, entitled ‘Petrol Crisis?’, with a Ford Focus ST (issue 119). That was when fuel costs were shooting skywards and even we at evo, who normally adopt a blind-eye approach to fuel thirst because it helps keep our and your spirits up, had begun to think it was starting to matter.

No-one else made anything quite like this Mégane then or now. The closest rivals are probably the BMW 120d M Sport and the seldom-seen Toyota Auris D-4D SR180, but neither is a true, motorsport-flavoured hot hatchback developed by people like us but with more engineering skill. We’ve long enthused about Renaultsport-flavoured Méganes, the R26 and R26.R being particular favourites, but would the idea of putting a diesel engine in one be stretching thought a little too laterally?

Our test, which reflected core evo values despite the fact it was questioning those values, predictably gave victory to the Ford on account of its more enticing engine and despite its much greater thirst. But we knew the picture was broader than that, which was why, at 2580 miles, we took the Renault into our fleet. And then that magic thing occured, when living with a car sees your priorities change a bit.

Take the engine, for example (a rather vital example, here). It’s a 173bhp, or 175 PS, turbodiesel that’s nearly twice as powerful as that fitted to Mrs Simister’s trusty Toyota (itself an ex-long-termer from 2001, if you’re wondering) despite being just 0.1 litres smaller. And it has torque to match; 265lb ft at just 2000rpm. Mrs S adored the Mégane for its bypass slip-road authority, for the way it squirted past nearly everything with just a squeeze of the accelerator, and for the way it sounded so smooth and civilised compared with the combustive rattle of her own machine. So did I.

Yet this is a diesel which isn’t ashamed of its emissions, be they aural or gaseous; a self-regenerating filter means they don’t include particulates. It has the usual fat pair of Renaultsport Mégane tailpipes, and if we lived in a diesel-only world we’d think the engine has quite a crisp edge. No, it doesn’t rev much, but it doesn’t need to. The more you drive the dCi 175, the more you fall for its ever-ready torque and incredibly relaxed, licence-threatening cruising ability.

Our car had the Cup chassis option (£400) – slightly different for the diesel than for the petrol to take account of different engine weights – and of course it had the usual Renaultsport Mégane front suspension in which the struts don’t steer and the wheels pivot via a separate hub carrier. The recent snow and ice proved the system’s worth in eradicating torque steer, but whatever the weather the Renault steered crisply and linearly, scuttled athletically around corners and generated huge grip while the tyres lasted.Other good things were the keyless entry and start, to which I became a convert except when it sometimes didn’t work, and the hugging Recaro seats (£850). I was less taken with the xenon headlights (£500), which seemed too often to trigger road rage in the cars in front. Xenons are too aggressive, and we don’t need them.

Occasional locking/unlocking hesitancy and one CD-player strop apart, the Mégane never went wrong, but it did get four new tyres, the windscreen developed a huge crack and the rear bumper got scuffed by a previous custodian. Ian Eveleigh, who wasn’t the scuffer, ran the Renault to the tyre-death point and organised the one and only service it needed, at 12,000 miles, at West’s in Cambridge. That cost £266.61. The only other expense was £548 for the tyres, Continental SportContact3s, at 13,000 miles – the penalty for trackday entertainment. It didn’t really need all four, as the rear SportContact 2s had life left, but we wanted to keep them all the same.

I’ll miss the Mégane. It used no engine oil; even better, it used little diesel oil, averaging 37.2mpg in my care and breaching the 40mpg mark under Ev’s possibly lighter right foot (or economy-improving commute). It’s a truly great car for today. It looks like any other Renaultsport Mégane, with no diesel badging, it’s supple over bumps for a Cup-chassis hot hatch, and it won’t melt your credit card as its torque blows you along.

The combination of attributes is unique, and compelling. It’s a diesel car with proper evoness, and Renault has that field to itself. The R26 is the best-selling hot Mégane, but the dCi 175 diesel outsold the ‘225’ petrol Mégane this past year. Yet that dCi figure is still just 200 units. If buyers’ minds were more open, it might have been a whole lot higher.