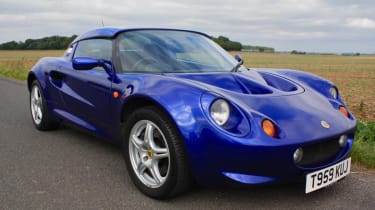 Few of life’s greatest pleasures are free, but if you’re a car nut one of the finest zero-cost pastimes is browsing online classifieds. So you’ll be pleased to know that evo has just launched a new online used car search engine powered by Motormutt, which finds the best modern and classic metal on sale in the UK, Europe and even beyond.

I don’t need an excuse to look at cars I neither need nor can afford, so I’ve been snuffling around Motormutt to see what I can find. Three cups of coffee and two Cadbury’s Mini Rolls later this absolutely immaculate S1 Lotus Elise is my first Friday want.

With just 7800 miles from new this pristine Azure Blue beauty is one of those time warp cars that take you back to the year they were made, in this case 1999. I can still remember the first time I drove an Elise, during the summer of 1996 – the year the car was launched. Small, pretty and weighing just 725kg it really made the most of its modest 118bhp Rover K-Series engine, while the purity and sophistication of the handling and ride were like nothing I’d ever experienced before. With so few miles and a meticulous maintenance record this is the closest you’ll find to an original as-new S1 Elise in 2012.

Of course that’s reflected in UK Sportscar’s asking price of £16,995, but if you – like me – are fascinated by cars that have apparently cheated time this freakish Elise is uniquely appealing. With the S1 rapidly gaining collectible status and Lotus embarking on its mission to play Ferrari at its own game, this completely original car could also be one of the best examples of a much-loved era in the Norfolk sports car maker’s history.

If you want to look for your own dream performance car then check out Motormutt here, or click on the 'Cars for Sale' tab anywhere on the site. You can see the original listing for the Lotus Elise S1 here.

And check back next week for Dickie’s next Friday daydream!