In the wake of it's Exige V6 Cup R, Lotus has launched a new track-only Elise S Cup R model, which will be on show at the Autosport show this month. Spec details, prices and pictures here 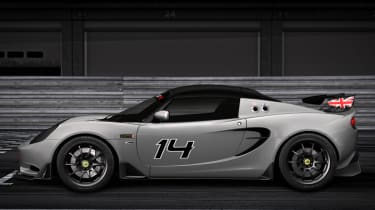 Lotus has launched the new Elise S Cup R, a hardcore track-only version of the supercharged Elise. Powered by the same supercharged 1.8-litre Toyota engine as the standard road car, the car has been developed specifically for track use. The car will make its UK show debutut at the Autosport International show later this month.

Performance has been improved in many areas, and the car features a full aero package. A front splitter, winglets, barge boards, rear diffuser, floor extensions and a rear wing apparently add a substantial amount of downforce. Lap times are said to be reduced by around four seconds over a 2.2 mile lap, compared to the standard Elise S.