Lotus has introduced a new entry-level Elise with a 1.6-litre Toyota engine. As good as the old 1.8? 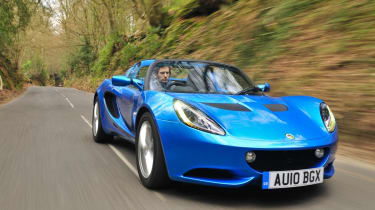 The new 2010 baseline Elise. Replacement for the brilliant Elise S that was evo’s 2006 real world car of the year.

It's the first Elise ever to have a 1.6-litre engine. It uses Toyota’s Valvematic system, which works directly on the inlet valves rather than using throttles, meaning greater efficiency and increased fuel economy. Lotus reckons that with a suitably conservative right foot you can get 500 miles from one fill of the 40-litre tank - to save you doing the calculations yourself, that means averaging 56.8mpg.

The chassis and suspension set up remain the same as the previous generation car, so it’s business as usual when it comes to ride and handling, which is very good news. Sublime control and balance matched to fantastically involving steering mean it’s a true joy to thread down springtime lanes. The drop in torque over the 1.8-litre means that the engine really needs to be revved to get the most out of it, but when you get it spinning it’s got plenty of character.

Even with the optional (£2000) touring pack and the new options of cruise control and parking sensors it’s not as luxurious as a Porsche Boxster, but it is nearly 500kg lighter and £7k cheaper.

Toyota’s 1.6-litre engine is produced in Deeside not Japan, which helps the car’s lifetime carbon footprint quite considerably.