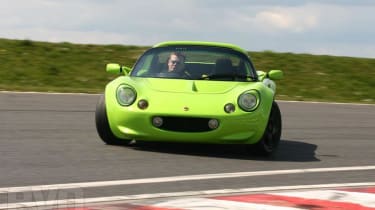 On the face of it, £26,800 seems a lot for a series 1 Elise, even one that’s had its original Rover K-series engine replaced by a K20A Honda Civic Type-R unit, but then there’s much more to Stark Automotive’s ‘Elise R’ conversion than that. The chassis is stripped and cleaned, the bodywork is resprayed and the interior is re-trimmed in Alcantara. Underneath, the suspension receives an equally comprehensive makeover, gaining adjustable Nitron Racing dampers, powder-coated wishbones and upgraded toe links and bushes.

The result is a car that not only looks and feels brand new, but is also one of the best trackday Elises I’ve ever driven. As you’d expect with 236bhp in such a lightweight machine, the Stark fires itself at the horizon furiously when the VTEC lobes come on cam. The six-speed Honda gearbox helps keep everything nicely on the boil and uprated brakes tirelessly keep everything in check. Meanwhile, understeer has been banished and replaced by balance and rear-end adjustability.

One drive is all it takes for you to realise that, far from being expensive, this little Elise is actually very good value indeed.