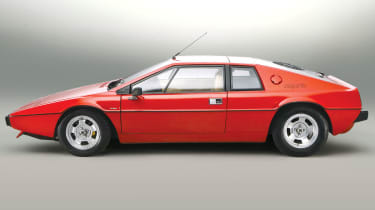 It was only a couple of years after the 1973 oil crisis, but Lotus technical director Tony Rudd was a man with a mission. He’d been charged with seeing two new models into production, completing the transformation of the Hethel manufacturer into a serious rival to the likes of Lamborghini and Ferrari. Project M50 was to be the new four-seater Elite; Project M70 would be a two-seater mid-engined coupe to replace the popular but aging Europa.

The latter was born after a chance meeting between Colin Chapman and designer Giorgetto Giugiaro. The famous Italian stylist had recently penned the mid-engined Bora for Maserati, and an impressed Chapman gave him the nod to work on a brand new design for Lotus. Initially based on the Europa’s chassis, an early version was displayed on Giugiaro’s Ital Design stand at the Turin motor show in 1972. It received a hugely favourable reaction from both the press and the public. Soon after, Lotus began working with Giugiaro to refine the styling into what would eventually be unveiled at the British motor show three years later as the Esprit.

Meanwhile Tony Rudd headed up the ‘think tank’ team based at Ketteringham Hall in Norfolk. Here the basic mechanical layout was agreed, engineered and refined before the designs were passed to chief development engineer Roger Becker for translation into production-ready cars at nearby Hethel.

Project M70 utilised Lotus’s own Type 907 2-litre, 4-cylinder, 16-valve engine, already tried and tested in the Jensen Healey. In the Esprit it would have 160bhp in European specification with twin 45 Dellortos. It was mounted longitudinally behind the occupants, and despite a tendency to leak oil (which became apparent later) it was a robust and compact unit. The Europa’s Renault-sourced five-speed transmission was simply not up to the bigger power output of the Esprit, so instead Citroen’s five-speed gearbox/final drive, as used in the Maserati Merak, was employed.

Roger Becker remembers well the occasion when Colin Chapman took the first prototype Esprit, finished in orange, from Ketteringham Hall and out on the public road for the very first time: ‘Chapman came to see me, handing me the keys and commenting that the rear suspension was weak and that he required a report the next day as to why. As it turned out, the car was about 100 miles away at the side of a road, and when I arrived it was obvious the suspension had actually broken since the rear wheel was hanging off as a result of the car sliding into the kerb. In my report I cited a catastrophic failure of the rear suspension. I didn’t dare tell Chapman he’d simply been driving too fast!’

The independent rear suspension was in fact typically Colin Chapman – very simple, it even utilised the driveshafts as part of the suspension, which was later to cause premature wear issues in production cars. Combined coil spring/damper units were also used, steering was unassisted rack- and-pinion, and the dual-circuit Girling brakes had solid discs front and rear.

The first production Esprits appeared in July 1976, and the price tag of £7979 compared favourably with the £11,660 Ferrari 308 GT4 and £11,500 Porsche 911 Lux. Lotus claimed a top speed of 138mph and 0-60mph in 6.8sec, and while Motor magazine could only extract 7.5sec for the latter, it praised the road-holding, brakes and gearchange. Noise and vibration came in for criticism, though, as did rear visibility.

Early sales were good if not outstanding, but the Esprit was about to be propelled into the worldwide spotlight when United Artists were to request the loan of a pair of cars to feature in the 1977 Bond film The Spy who Loved Me.

Quite by chance, Becker ended up doing most of the stunt driving in the film. ‘It was pure coincidence to be honest,’ he remembers. ‘I drove one of the Esprits to Sardinia, the other, PPW 306R, arriving later by train. The second-unit director was unhappy with the performance of the stuntman, who just couldn’t get comfortable with the car as he’d never driven anything mid-engined before. I’d tried to coach him, but he still wasn’t comfortable with it.

‘When the director called for the car to come up to the top of the set, the stunt driver wasn’t around, so I jumped in and drove the Esprit sideways up the hill and pulled in next to him. He obviously thought I was the regular driver since he shouted, “Why the bloody hell can’t you do that all the time?!” From then on I did all the driving…’

The film was an enormous success at the box office and the resulting exposure not only resulted in sales of the Esprit rocketing, but also saw Lotus’s new sports car firmly entrenched in the public’s affection.