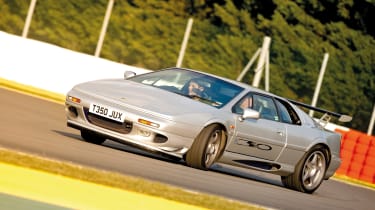 The Esprit had been round since 1976, but it was the introduction of the Turbo model as an addition to the normally aspirated S2 (Series 2) Esprit in 1980 that signalled its arrival as a serious supercar, the 0-60 time tumbling to 5.6sec, the top speed climbing above 150mph, the always striking Giugiaro bodywork gaining skirts and spoilers and a whole new attitude.

With the Peter Stevens-redesigned S4 version introduced in 1987, the plastic- fantastic from Norfolk became the most spectacular celebration of intellect over muscle in supercardom. With just 2174cc and four cylinders, the turbocharged S4 developed a nominal 264bhp, although if running conditions were cool, the engine management allowed up to 280bhp – a staggering 120bhp more than the original, naturally aspirated S1. With a power-to-weight ratio of 232bhp/ton, the S4 could accelerate from zero to 60mph in around 4.7sec – faster than a Ferrari 512TR.

The S4 also had arguably the finest chassis of any Esprit, with cornering abilities a world apart from the S2 Turbo’s. Turn-in was electric, grip borderline miraculous.

In its latter years, the Esprit was powered by a lightweight twin-turbo V8 and finally acquired the engine to do its brilliant chassis justice. Dramatic straight-line speed, phenomenal cornering power, stunning stoppers and responses that grew crisper, keener and more reassuring the harder you tried were the high points, a flat engine note and clunky gearchange the only real downsides.

Even at the very end with the be-winged Sport 350, when you only had to sit in one to know it was an old-school supercar with scattered, cheap switchgear, offset pedals, a cramped driving environment and poor visibility, the Esprit was all about driving dynamics, with handling and steering feel that were so pure they were still a match for any rival.