The Lotus T129 was reealed at the 2014 Le Mans car, ahead of its racing debut later in the year. Details here 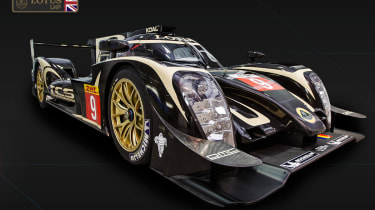 Lotus has unveiled the car it hopes will take charge to Audi, Porsche and Toyota in the 2015 Le Mans 24 Hours. Having initially been designed to race this year, the T129 LMP1 Prototype was instead unveiled at the world famous circuit ahead of the 2014 race, with confirmation that the privateer Kodewa team will use the car in the 2015 event instead.

The delay in getting the car onto track has partly come due to a switch from an Audi powertrain to twin-turbo V6 from engine manufacturer AER. No parts have been carried over from team Kodewa’s Lotus T128 LMP2 racer from last year either, so development of the new car saw engineers start with a clean slate.

The first time the car will take to the track in anger will be at September’s 6 Hours of the Circuit of the Americas in Texas, driven by Christijan Albers, Christophe Bouchut, Thomas Holzer, Pierre Kaffer and James Rossiter.