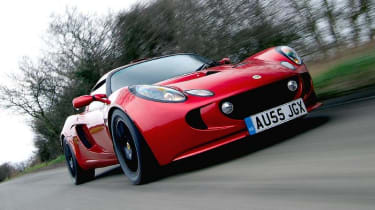 If the Pinocchio effect worked on PR men, the Lotus boys would be tripping over their schnozzles right now. When the limited-edition Exige 240R was launched last year (evo 082) we were told that there were 'no plans for a series-production supercharged Exige'. Not that we believed them, and as the new Exige S handsomely proves, we were right to be cynical. The Exige S isn't identical to the 240R, despite the addition of an intercooled Roots-type supercharger to its Toyota-sourced 1.8-litre four-cylinder engine. It's missing some of its sold-out predecessor's power and torque - the S's peaks are 218bhp and 159lb ft compared with 243bhp and 174lb ft for the 240R. Why the drop-off? For emissions and noise considerations, says Lotus, though you might also speculate that as Exige S prices start at £33,995 and the 240R retailed at £43,995, it was politic to keep a little dynamic distance between the two for the sake of those who'd bought the 'special' Exige. Which isn't to say that the S feels less than special. On the contrary, the subjective impression it gives on the road is that it's as quick, if not a little quicker, than its more powerful sibling. Lotus's senior development driver, Matt Becker, says he thought the same thing when he first drove the S, but subsequent sessions on the track confirmed that the 240R is the faster of the pair, although its advantage only becomes clear-cut at very high engine speeds. Lotus claims the Exige S is its fastest accelerating production car to date, hitting 60mph in 4.1sec - a mighty achievement when you consider that the Esprit Turbo ranked as a pukka supercar not all that long ago. What sets the S apart from regular Exiges most vividly is the way that the supercharger plumps up the torque curve in the sub-6800rpm zone before the engine switches from fast to furious; you don't have to row it through the gears to get genuinely stimulating mid-range thump, and the transition phase to the more manic induction set-up is far less pronounced. That said, if you find enough road-space to indulge your right foot and wind the engine round to 8000rpm - and even up to 8500rpm for a couple of seconds before the electronics rein things back in - then you'll be travelling monumentally fast. The only shame is that the Exige doesn't sound more inspiring. The whining supercharger is evocative enough, but at high revs there's an underlying mechanical harshness to the Toyota lump's tune. The Exige S benefits from the latest round of enhancements to the Exige and Elise ranges, including orthopaedic seats, airbags, LED tail-lights, super-lightweight alloys and a Lotus-developed traction control system, not to mention a host of other items that are standard or optional depending on which of a multitude of 'packs' you choose from. The Lotus Traction Control (LTC) is worth a special mention - it works through the engine management and on a slippery Silverstone circuit allowed for some very generous drift angles before electing to come to the rescue. For track work you can also specify a Torsen-type limited-slip differential, though only if you also have LTC. While there's a danger of the Exige range appearing as complicated as the Mondeo's, in reality the options are 189bhp normally-aspirated and, now with the S, 218bhp supercharged, both with a variety of trim packs. The Exige S, if your funds will stretch that far, is a very fine thing and in many ways a performance bargain.