The Maserati GranTurismo Sport replaces the S and boasts more power, tweaked suspension and a new gearbox. And it's great 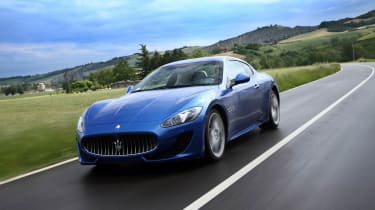 What is it? The revised version of Maserati’s beautiful 2+2 Coupe. The 2012 GranTurismo Sport uses a 4.7-litre V8 engine, and sits between the regular GT and the hardcore MC Stradale, replacing the GranTurismo S. The Sport is available with either a six-speed ZF torque-converter automatic gearbox or Maserati’s robotised, single clutch, six-speed transaxle transmission. Technical highlights? By tweaking the pistons, valve timing and the engine ECU, Maserati has managed to squeeze a further 21bhp and 23lb ft from the (Ferrari built) 4.7, so long as 98 RON fuel is being used.  The chassis has been subtly tweaked too, with a 12 per cent stiffer rear anti-roll bar and revised software for the (now standard) Sport Skyhook dampers, which are 10 per cent stiffer in their sport mode than before. The brakes have different (and lighter) discs front and rear, topped off with new aluminium callipers (six-pot front, four-pot rear), painted a sporting blue unless specified otherwise by the customer. The net effect of all these changes is to reduce the brakes’ unsprung weight by 15 per cent.  What’s it like to drive? The torque-converter’s gearchanges have been speeded up dramatically, dropping from 400ms to 200ms when the sport button is pressed. The engine now ‘blips’ electronically on downshifts when you’re shifting manually, and most drivers might be fooled into thinking they’re driving a GranTurismo fitted with the automated manual, and not a pure automatic version.  That’s great news, as the frustrations with the automated manual come when manoeuvring at slow speeds, and it’s here where the full auto version really comes into its own. The mildly tweaked suspension seems to have sharpened up the turn-in further, while the ride out of sport mode seems to be slightly better controlled than before. One of the most welcome changes, though, are the new seats fitted to the Sport, which finally offer GranTurismo drivers proper support when cornering.  How does it compare? It’s always tricky to know what to compare the GranTurismo with, as it offers vastly more interior space than potential rivals like the Jaguar XK and Aston Martin DB9 but it isn’t as sporting as cars like the Porsche 911 and Nissan GT-R. The fact is, when you’ve got the Maserati’s V8 singing towards the redline down your favourite stretch of road, you won’t care about what its rivals are because you’ll be drowning in what must be one of the best sounding cars of all time. Anything else I need to know? Next year’s introduction of the new Quattroporte heralds a new generation of turbocharged engines and Maserati insiders tell me they can’t make them sound nearly as beautiful as this 4.7-litre V8, so this could be your last chance to buy a Maserati powered by this charismatic engine.  The revised automatic gearbox in this new Sport model is now almost as good when pushed as the previous MC-Shift transmission, but offers dramatically better drivability at slow speeds and when manoeuvring than the automated manual. It’s £3330 cheaper too (£90,390 plays £93,720). In fact, it makes you wonder why it’s taken Maserati this long to produce it, as this Sport edition is the Maserati GranTurismo as it always should have been.