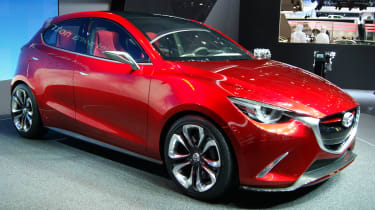 Mazda has revealed its Hazumi concept at the 2014 Geneva motor show, a hatchback labelled as the design forefather for the next-gen Mazda 2.

Whilst the rear shares a somewhat sportier but still clear resemblance to the previous 2, the front follows the marque’s latest design language with its large five-point front grille and imposing headlights. If the Hazumi applies the same influence to the 2 as Mazda’s recent concepts, little should change when the car lands in showrooms.

The interior however, is unlikely to make it through to production models. Resembling something more track focused, the Hazumi’s interior features sports seats and racy accents that create surroundings more familiar to hot hatch owners.

Accompanying drivers in that cabin is Mazda’s Connect infotainment system, which can link with smart phones to access driver-safe functionality including music and phonecalls. The concept is also fitted with i-ACTIVSENSE accident-mitigation systems, which include automatic dipping headlights to reduce glare to on-coming drivers, radar cruise control as well automatic braking systems to avoid urban collisions.

Under the bonnet is a member of Mazda’s SkyActiv engine family in 1.5-litre diesel form. The SkyActive-D will supposedly produce no more than 90g/km of CO2 and offer 69mpg on the EU cycle. Apparently the engine will produce large amounts of torque too, meaning it should be far more effortless than older variations.

With no confirmation as to when the 2 will be unveiled, the Hazumi is all we have to go by. No doubt still very much in concept form, the potential the Hazumi presents for a trendy next-gen Mazda 2 is at least promising.