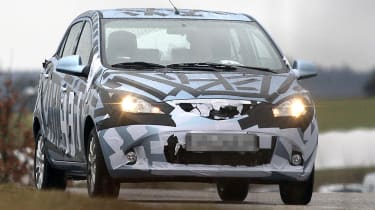 All car enthusiasts that hoped the 2008 Mazda Kiyora Concept would form the base of the up-coming Mazda 1 might be disappointed by the prototype we snapped recently testing in France. Despite its far-from-production-ready-look, the Kiyora was thought to preview the Japanese car-maker's plans to introduce vehicles that are not only good to drive, but also exciting to look at. Well, not this time around...

We admit we’d been disappointed, too, as first we believed we had photographed nothing but a still-disguised prototype of the current Mazda 2 – or maybe an early facelift. But closer inspection revealed the differences. And there are actually a lot:

Not only does the car in the photos have different bumpers front and rear, it also features differently shaped taillights and headlamps, another bonnet (view the position of the wipers!), much shorter rear side-doors, a differently shaped and placed fuel filler cap and a different rear door. And that’s by far not all!

So, we’re convinced this is the first spy-shots of a thinly disguised all-new Mazda 1 – even though it has nothing in common with the exciting Kiyora Concept shown in 2008. That hid a small 1.3-litre direct-injection engine under its body. Aided by a small electric motor it featured a Smart Idle Stop System (SISS) that automatically shuts down and restarts the engine as required. The unit was mated to a newly developed six-speed automatic transmission system which boasts similar fuel efficiency as a manual system. Putting these technologies together limits CO2 emissions to just 90g/km or less. Let’s hope that – at least – this innovative system will make it into the production Mazda 1. Judging from the thin camouflage found on this prototype, me reckon we’ll see the car’s official presentation at the Frankfurt Show in September this year.