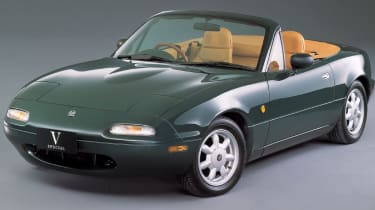 As the dark clouds of recession cast a long shadow over automotive consumerism, how many car makers wish they could sell something the world wanted as much as it did the Mazda MX-5 back in 1989? Not very fast, hardly original in concept and never intended to yield a fat profit margin per unit, the little Japanese roadster nevertheless tapped a seam of dormant desire that made it an immediate sensation and has kept it in production for 20 years, over which time it has become easily the best-selling roadster in history.

An American journalist-turned-engineer named Bob Hall is largely credited with having come up with the idea for the MX-5, though it was soon obvious that millions of people must have been thinking along similar lines. Hall was an expert on Japanese cars and spoke the language fluently. The story goes that Kenichi Yamamoto, head of research and development at Mazda, asked the American wordsmith what kind of car Mazda should make next. Hall replied that something along the lines of the now-defunct classic British sports car (Lotus Elan, MGB, Triumph Spitfire – something simple with two seats and a soft top) might not be such a bad idea.

The conversation obviously stuck in Yamamoto’s head because when the two men met some years later – Hall having relinquished full-time journalism for a position in Mazda’s product planning department, Yamamoto now chairman of Mazda Motors – the topic came up again and was discussed in greater detail. As a result, Hall was given the go-ahead to research the idea further. In 1983, his concept got the thumbs-up and, in a new initiative that lives on to this day at Mazda, its development was turned into a competition between the Mazda design teams in Tokyo and California.

Team California’s proposal was based around a simple front-engine, rear-wheel-drive layout redolent of the British classics and codenamed Duo 101. The Japanese team presented two options: front-engine and front-wheel drive or rear-mid-engine and rear-wheel drive. At the first round of judging in 1984, the mid-engined proposal was deemed impressive but it was felt that it might fall foul of the noise, vibration and harshness (NVH) targets set for the project. At the second stage of judging 16 months later, when full-scale clay models were presented for the first time, the Duo 101 shone out from the rival designs and became the basis for Mazda’s new lightweight sports car.  (The Duo 101 codename, incidentally, referred to the possibility of using either a soft top or hard top.)

The story then moves to England’s south coast where International Automotive Design (IAD) in Worthing was commissioned to develop a running prototype, codenamed V705. Using a glassfibre body, an engine from a Mazda 323 and a hotch-potch of components from other Mazdas, the V705 was completed in August 1985 and transported to the States where it was driven on the roads around Santa Barbara to gauge public reaction.

That the public must have liked what it saw was confirmed in January 1986 when the project was granted final approval. The codename was changed to P729 and Toshihiko Hirai was given the responsibility of bringing the car to production. Five more engineering mules were built by IAD, who also undertook the first front and rear crash tests. As Tom Matano and Koichi Hayashi worked on the final design details, the project was moved back to Japan to ready it for production.

The model name MX-5 (as in Mazda eXperimental project number 5) was decided upon as late as 1989, just a few months before it made its international debut at the Chicago Motor Show. It was powered by a 115bhp 1.6-litre twin-overhead- cam, 16-valve in-line four cylinder engine and weighed just 940kg. The debt owed to the Lotus Elan, both aesthetically and conceptually, could now be plainly appreciated.

The car was brilliant and brilliantly timed. It came across as intimate, accessible and involving just as Lotus’s second stab at producing an Elan – which looked like a plastic jacuzzi with a tonneau and had front-wheel drive – was disenchanting swathes of the motoring press with its show-off grip and neutral, aloof, yawn-a-mile handling. If the second Elan was a false dawn for Lotus, the Mazda precipitated a worldwide roadster revival.

It reminded the world how deliciously pure and simple the pleasures of a light car with a sweet four-pot twin-cam in the nose driving lightly rubbered rear wheels via a flick-wrist gearbox could be. The MX-5 vibe was consistently engaging, the place where input and feedback were perfectly synchronised. Twenty years and two generations on, that still holds true.