It might be the softest, most liveable McLaren yet, but the new 570GT is still a hugely enjoyable and spectacularly fast car 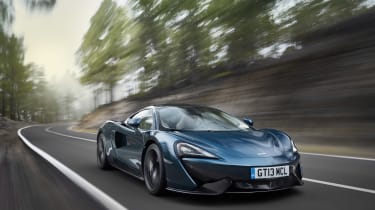 McLaren’s third ‘Sports Series’ car, joining the 570S Coupe and 540S Coupe, and the 570GT is the most road-biased and luxurious McLaren to date.

It has recalibrated steering, plus suspension and chassis tweaks aimed at refinement, plus modified styling that creates increased luggage space. Inside, the cabin is tailored for luxury - more so than any other McLaren to date. It’s roomy too - unlike the 570S the GT has 220 litres of space behind the seats on a leather-covered deck. Under the bonnet is another 150 litres of stowage space.

But this is still a McLaren. The chassis is carbon fibre, the engine is a V8 twin turbo and it will hit 204mph flat out. Or in other words, it’s mighty, mighty fast. However if you require rear seats, look elsewhere.

In terms of power and torque, the GT is identical to the S - although at 1350kg (with the lightest options) the GT is 37kg heavier than the S. You won’t find a lighter GT car though.

Unlike the 650, 675 and P1, the 570 range does not feature interconnected hydraulic suspension. Instead a more conventional spring/adaptive damper/anti-roll bar set up is fitted. McLaren has reduced spring rates by 15% at the front and 10% at the rear.

Normal, Sport and Track settings can be dialled up via the ‘Adaptive Panel’ and activate different settings for both the chassis and powertrain. Finally, the steering ratio has been reduced by 2%.

It takes, oh, about 30 seconds to feel the difference between the GT and the S. The ride is smoother, the cabin noise reduced (thanks to more sound absorbing materials in the bulkhead and rear deck) and the steering rotation slightly slower.

Like all McLarens, the driver is put at ease almost immediately thanks to the consistency of controls, an excellent driving position and the slack-free connection to the chassis.

As a cruiser, the GT is exceptional. It tracks beautifully, stability is strong and noise levels low. There is some minor porpoising when in ‘Normal’ mode, but this is eradicated (with little effect on overall ride comfort) when you select Sport.

On twistier roads and with Track selected the GT sprints, steers and brakes with hugely impressive force. Grip is strong, despite the more road-oriented P Zero tyres (the S is fitted with more performance oriented Corsas), with understeer arriving slowly when the limits are breached.

Sometimes you feel the car is understeering more than it is, due to the reduced steering ratio and the increased amount of lock required, but in reality the car offers a neutral handling balance and plenty of warning when the limits are breached. It’s not the most adjustable chassis and doesn’t dance around like, say, a 488 or a Speciale, but it remains a talkative and enjoyable B-road sprinter.

The V8 engine has always surprised with its top-end reach, and continues to charge hard even at the top end of the rev-range. However, it offers little vocal enjoyment and can be boomy at times. The gearshift feels a little less sophisticated than the best alternatives from Audi, Porsche and Ferrari - but we are talking tiny degrees here.

Overall, the 570GT is a refined, enjoyable, and extremely fast Gran Tourer that can also mix it with the fastest cars on the road for speed, if not outright enjoyment. If the latter is your priority, then the more expressive, more ‘keyed-in’ and ultimately more focused 570S is the car for you. It’s not as pretty mind, at least to our eyes.

The primary rival, and benchmarked car, is the R8. The Audi offers a similar level of speed/refinement duality as the 570S, plus quattro four-wheel drive traction should you live somewhere with adverse weather. The R8’s (non-turbo) V10 engine is significantly more involving, exciting, and enjoyable to listen to than the McLaren’s V8 but overall the R8 can feel strangely numb, and cannot match the sense of connection offered by the 570GT.

At £154,000 (the 570S is £143,250), the 570GT also lines up against cars such as the Bentley Continental GT and the Porsche 911 Turbo S. The 911 offers four-wheel drive (and two small rear seats), and while its straight-line pace and cornering prowess is extraordinary it also lacks the slightly ethereal ‘specialness’ of the 570GT - or the 911 GT3 for that matter. The 911 Turbo S is not as refined as the McLaren either.

For total refinement, there’s only one rival at this price - the Bentley. In V8 guise, it matches old-English luxury with a surprisingly effective chassis. It too has two small rear seats and four-wheel drive.

However, it’s not a car that encourages you to seek out more challenging roads - which is where the 570GT really scores. It may be the most refined, luxurious and ‘long-trip’ McLaren ever made - but its DNA is still laced with sports car genes. 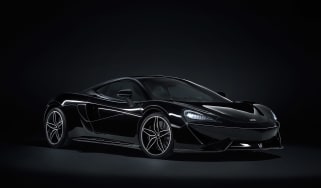 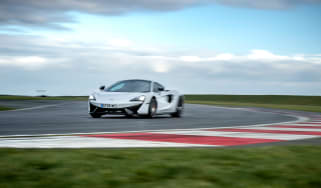 McLaren 570GT Sport Pack review – the best of both worlds

McLaren’s GT car gains the dynamic set-up of the 570S coupe and is even better for it.
Skip to HeaderSkip to Content