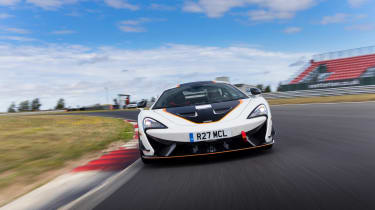 A race car for the road is a tag that should send as many shivers down your spine as it does sweat to your palms. Because the reality is that the end product is often a car that doesn’t work on the road and would finish plumb last in any motorsport race you cared to enter it in.

McLaren has a different approach to this old race car for the road adage. Admittedly the 620R is its first road-racer, but rather than take a 570S and add some aero bits and graphics from its GT4 race car, it’s literally taken a 570S GT4 racer and added a passenger seat, some road tyres and a pair of number plates. The result is an extremely convincing driver’s car on road and a devastating one on track, and while it carries a hefty price tag and some would consider it to be a niche too far, it’s an indulgence that delivers some of the sweetest rewards. 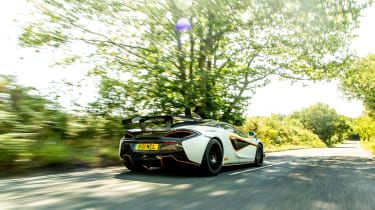 It’s a McLaren, you didn’t expect it to have anything but a twin-turbocharged flat-plane crank V8, did you? Okay, you might have thought the larger 4.0-litre engine from the 720S would be used, but the 570S GT4 race car has strict regulations to abide by, so 3.8-litres is your lot.

Not that it’s to be sniffed at. There’s a new ECU bespoke to the 620R to capitalise on its freedom to run without any performance crippling restrictors and it’s responsible for the car’s 611bhp (the name is taken from the 620PS power figure) and 457lb ft, a 19bhp increase over the 600LT, while torque remains the same. 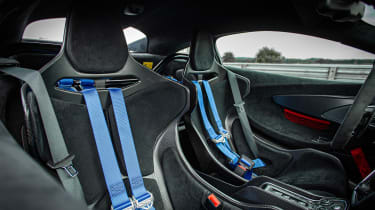 McLaren’s seven-speed seamless-shift gearbox is retained and the company’s inertia-push technology is also available that takes the built-up energy from the flywheel to provide a torque burst during upshifts.

For a car designed for lap times rather than drag races the 620R’s performance figures could be considered irrelevant, but for those who live and die by such metrics get your notebooks out: 0-60mph in 2.8-secs, 0-124mph in 8.1-secs, the quarter mile takes 10.4-secs. It stops as quickly, too. From 124mph to zero takes 116 metres and 62mph to zero just 29 metres and it will top 200mph. 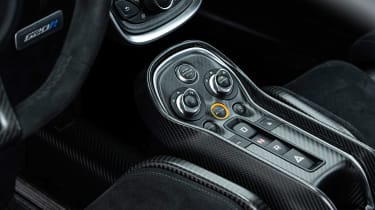 Carbon fibre features a lot on and in the 620R you won’t be surprised to hear. Its front bumper, splitter, dive planes and carbon fibre bonnet are redesigned versions of those created for the GT4 race car, with changes made to suit legal requirements for the road and McLaren’s manufacturing quality.

The front splitter retains the racer’s more pronounced aeroblades and larger cut outs to increase the volume and speed of air-flow through and under the car, with the pair of nostrils in the carbon fibre bonnet designed to increase downforce and accelerate airflow over the car. Dive planes on each corner aid downforce by creating a low pressure at track level that accelerates air along the side of the car, they also help with brake cooling; the roof scoop is optional via MSO.

Beneath the 620R’s track inspired body is the most significant upgrade in the shape of the two-way adjustable coilover dampers, stiffer springs and anti-roll bars. Not only are there 32 settings available for rebound and compression, the manual adjustment also allows for changes to be made depending on the weather, the surface, camber and the type and frequency of corners, and if you prefer to ride the kerbs or not. Or you could have the Sport Series standard adjustable adaptive dampers fitted as an option, although you’ll not only forgo the adjustability but the six kilo weight saving, too. Stainless steel bushes in the suspension top mounts have replaced the Sport Series’s rubber items, with lighter aluminium wishbones also fitted. 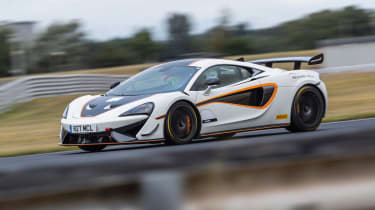 The final piece in the 620R’s chassis upgrades are the tyres. Pirelli’s P Zero Trofeo R road tyre is fitted as standard, but should you be inclined to use your 620R as intended for track use you can also order a set of Pirelli slick tyres that fit the standard 19-inch (front) and 20-inch (rear) wheels. The result of fitting the slicks is an eight percent increase in contact patch and a four percent improvement in lateral G.

Internally you’re looking at McLaren’s super-lightweight carbon-fibre race seats, a six-point harness (thankfully the inertia reel seatbelt is also retained), a 12 o’clock marker on the alcantara trimmed steering wheel and larger carbon gear shift paddles. An additional door pull is fitted to each side (to aid closure when you’re belted in), the carpets and glovebox are no more and the bulkhead is carbon fibre and the same material is used to create a raised centre tunnel to allow easier operation of the controls when using the harness. Air conditioning, sat-nav and a radio are all optional.

Intense and in a good way. On the road the 620R isn’t as extreme and uncompromising as its specification suggests, with the coilovers adjusted for the road it retains a much higher level of ability to breathe with the road surface as McLaren’s always do, maintaining a higher than expected level of pliancy and body control for a car that’s focused on track driving rather than the road.

There’s considerable grip from the Trofeo Rs on the road, which allows you to push much harder and with more conviction and confidence than you would in even McLaren’s potent 600LT. It has that level of detailed feedback that comes from fitting components that allow such a precise level of adjustment, bringing greater rewards with it too. 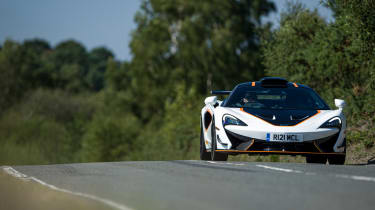 There’s no hiding from the fact that the 620R is far more capable a road car than you could ever safely exploit, but that it still offers a level of engagement and a thrill factor at acceptable road speeds is an unexpected surprise. It’s no highly strung racer constantly chomping at the bit to be let off its leash.There’s a high definition quality to its feedback and while it takes more commitment and effort from the driver, you can’t help but be drawn in and revel in the precision of everything it does.

On track, with a set of slicks fitted the 620R is in its element. What a slick tyre robs you in feedback it gives back to you in grip that allows you to push way beyond the limits expected of a car that you drove to the circuit in. It’s a given that it will turn-in with a ferocious bite and grip until Italy’s finest can hold on no more; that its carbon ceramic brakes are capable of delivering a level of a retardation that can only be dreamt off when forcing treaded rubber to bite to slow progress as you brake deeper, with more commitment and more control. What isn’t expected is how confidence inspiring, adjustable and engaging it is, too. A race car is designed to complete a lap as quickly as possible, so too is the 620R but where it’s different is how it works with you to complete its objective more than a hard edged racer ever will or can. 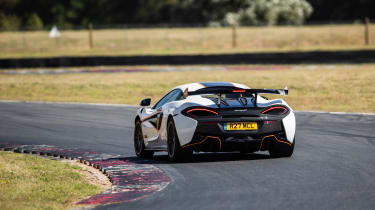 Brake late, brake deep, roll the nose into the apex and then feed the throttle in and let the 620R straighten the curve, take a lip of kerb on the exit and stretch the V8 that will never leave you feeling wanting and you’re immersed into McLaren’s interpretation of the ultimate track car. And it’s a rather nice place to be. If an expensive one.

As a car to elevate your track driving craft from a high performance road car to a racer the 620R provides an addictive and tantalising stepping stone. You could buy a cheaper and older ex-one-make race car, but for some having this role played by a road car will have considerable appeal. The adjustability within the 620R’s chassis that allows you to build to your ultimate pace rather than having to be able to match a race car’s ability on lap one, also can’t be ignored. There’s also the small matter that old race cars still require a sizable financial commitment to run.

There are cheaper road cars that don’t fall apart on a circuit, step forward Porsche 911 GT3 RS and McLaren’s 600LT, but for some they are too close to a road car in spirit. Which is where McLaren sees the 620R, it’s as much a road car to enjoy on track as it is a considerable step towards racing a GT4 car.