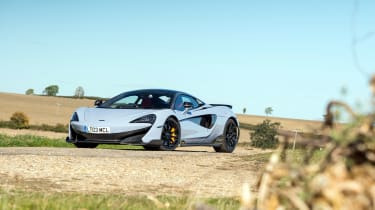 The 600LT is the new range-topper for McLaren’s entry-level Sports Series line-up. Where first there was just the 570S, the series has since grown to include the entry-level 540C and the more cosseting 570GT. The LT, however, is different, being more focused than any of its Sports Series predecessors.

The 600LT is more expensive than a Porsche 911 GT3 RS and less exotic than a Ferrari 488 Pista, and opens itself up for comparison with a whole host of hardcore supercars. But it also comes to market with plenty of kudos behind it, as the last Woking product to bear the LT suffix – the 675LT – was not only one of the most acclaimed road cars to emerge from modern-day McLaren, but also one of the best supercars ever, full stop.

So our expectations are high, and despite the 720S rewriting the supercar rulebook and being awarded the evo Car of the Year title in 2017, and this year’s Senna taking the McLaren ethos to a whole new level, the 600LT’s increased focus on driver thrills might just make it our favourite McLaren yet.

The engine is McLaren’s now-very-familiar 3.8-litre twin-turbocharged V8. Power is up from 562bhp in the 570S/570GT to 592bhp thanks to a remap and a flame-spitting top-exit exhaust.

Transmitting that power to the rear wheels is a seven-speed dual-clutch gearbox – complete with lightning-fast ‘inertia push’ shifts – and an open differential, as is the McLaren way.

As those figures suggest, the McLaren is explosively fast, an impression that's enhanced by the car's almost 80s levels of turbo lag. On the track you'll barely notice it as you wring every last rev out of the V8 and revel in its relentless, fire-spitting pace, but on the road the lethargy below 3000rpm can catch you out - you'll be dusted by turbodiesel hatches if you're not alert. Yet learn to work around this foible and you can make alarming progress, the 600LT firing down the road with a rocket-propelled malevolence that even shades some bona fide hypercars.

That said, it's not the most orchestral of engines. With with helmet on and the track-attack adrenaline pumping it's easy to overlook the bag-of-spanners idle and the full voice engine note that's more Motorhead than Monteverdi, but this is an engine that makes a limited effort to charm. Still, it's an improvement over the standard 570S, while the increase in volume and aggression certainly adds to the occassion, but this is an engine you work hard to access its volcanic forces rather than to hear it sing.

As noteworthy as the power increase is the 84kg reduction in kerb weight compared with a 570S (or 88kg if you spec the optional carbon front wings and roof), dropping the total to 1356kg. Weight has been saved throughout the car, whether that’s substantially in the form of 21kg from ditching the standard 570 seats, or a single kilo from deleting the glovebox and door pockets.

The Longtail moniker is justified by a 47mm extension to the car’s rear, while there’s also a 27mm longer splitter at the front. The increased manipulation of air means there’s now 100kg of downforce at 155mph, compared to the neutral figure of the regular car, but with no penalty in terms of drag.

Chassis-wise there are new forged alloy wishbones, stiffer and hollow anti-roll bars, recalibrated dampers and the carbon-ceramic braking set-up from a 720S. The steering rack, meanwhile, has a four per cent quicker ratio, there are also stiffer mounts for the engine and transmission, and the 19-inch front and 20-inch rear wheels are wrapped in a new, bespoke Pirelli Trofeo R tyre. 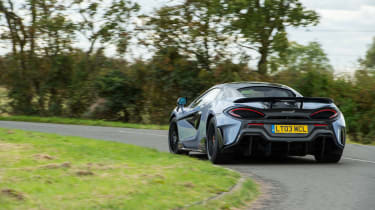 Impressive as a 570 is, every aspect of that car feels tempered with a nod to usability. With the 600LT this restraint has been removed and you feel as if you are gaining access the Sports Series’ raw ingredients. There’s no hint of vagueness, of squidge and imprecision, instead everything the 600LT does is ruthlessly, but delightfully, transparent and true.

It’s evident in everything from the hydraulically assisted steering set-up, which overshadows even that of the 570 in terms of immediacy and progressiveness, to the formidable brakes, with their carefully honed resistance in the pedal. In fact, this precision is replicated throughout all the main controls, where there’s a polished uniformity more often associated with the best Porsches.

Around the Hungaroring the car’s stability under braking, even when the ABS is triggered over a kerb, is exemplary, it’s adjustability on the throttle mid-corner as deft as you can manipulate with your right foot. All of which makes this car somehow unthreatening – up to a point, at least – and because it asks less mentally and physically than a car such as the Senna, while the lap times might be slower, there’s a strong case to say it’s more enjoyable.

On the road it's impossible not to draw comparisons with the last Long Tail to roll out of Woking - the 675 LT. That car was based on the 650S, which got McLaren's trick hydraulically connected suspension - a system that did away with anti-roll bars and allowed the LT to corner with rock solid composure and yet ride with spooky suppleness. The 600 LT's more conventional set-up (it still gets adaptive dampers) means it rides with greater firmness, with a nuggety seriousness that places it closer to a Porsche 991.2 GT2 RS than the exquistely damped Ferrari 488 Pista. What you lose in comfort you gain with a more instant sense of connection - this is a car that signals its intent from the first full rotation of the wheels. It's a more natural, analogue car than its freakishly talented by ever-so-slightly aloof predecessors.

What it does share with previous models is that sense that it's almost too fast for the road, that to get near its giddly high limits you need to be pushing very hard indeed. The turn-in is electric, the nose reacting the moment you turn the wheel, while the feedback is unfettered and and immensely detailed - a direct consequence of McLaren's contined adherance to hydraulic assistance. The grip is incredible, and the confidence it gives allows you to load up both axles quickly, setting the car up in a beautifully balanced four-square cornering attitude. At road speeds there's perhaps not the adjustability you get on the track (steering is mainly done by the front end, with throttle only being used to change attitude if you're feeling brave), but the feel, poise and agility of the 600LT more than make up for its lack of humour. 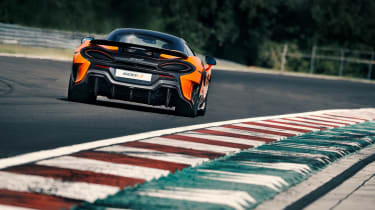 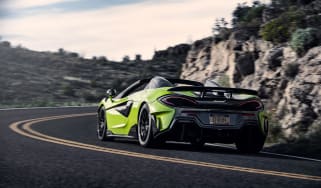