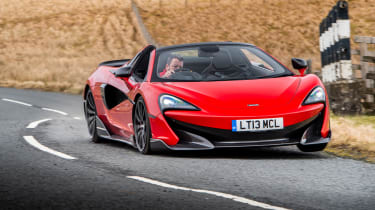 Our 2018 evo Car of the Year has had the roof chopped off to create the ubiquitous Spider version, but does the ethos of a hardcore, lightweight McLaren sit comfortably with open-top supercar motoring? Time to find out.

There are no surprises in the mechanical make-up of the 600LT Spider – it faithfully follows that of the coupe. There’s the same mildly tuned version of the familiar 3.8-litre twin-turbo engine found in the 570S, a remap, and the short-path exhaust system, meaning 592bhp and 457lb ft of torque, with drive sent through the same seven-speed twin-clutch gearbox. The 0-62mph time remains at 2.9sec, but you’ll have lost two-tenths on the coupe by the time you reach 124mph. Big deal… 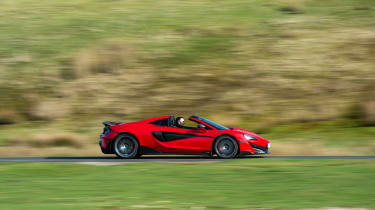 As with the engine, the rest of the 600LT Spider is the same as the coupe: the same forged wishbones, recalibrated dampers and suspension geometry, firmer engine mounts, lighter brakes and wheels and a quicker steering ratio; the same weight-saving measures, such as thinner glass, nets instead of door pockets and no carpeting. That all means that much like the coupe’s relation to the regular 570S, the 600LT Spider is 100kg lighter than a 570S Spider. It says 1297kg dry, but to maximise that difference you’ll need to order the MSO Clubsport pack, removing 5.58kg via its ‘Senna’ seats, titanium wheel bolts and various carbonfibre parts. Even so, it’s still around 50kg heavier than the coupe version.

The discreetly packaged roof mechanism requires 15 seconds to go from one state to the other, and can be operated at up to 25mph, which is handy if you drive into a rain shower.

And yes, it does still spit blue and orange flames out of that top-exit exhaust, the rear wing specially treated so that it doesn’t melt like a piece of raclette cheese under a grill. 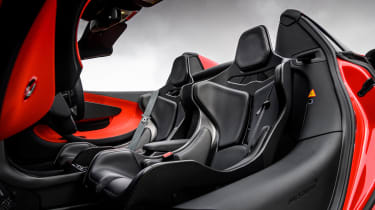 If there is a difference between the Spider and the coupe – at least in normal driving – you’ll be hard-pressed to spot it. The very nature of the McLaren Monocell carbon structure means that removing the roof panel in theory has no bearing on the structural rigidity of the car, and therefore no penalty other than the added weight of the mechanism. In one example there seemed to be slightly more wind noise at speed coming from the A-pillar area, but it’s hard to know if this is an incorrect seal on a very early-build car, as another car felt largely identical to the coupe. Rear-view mirror shake though – that simply doesn’t happen.

The 600LT is a car with a very high level of ultimate performance, but one that also involves and thrills at much more modest velocities as well – which was the secret of its 2018 eCoty success (for the coupe). It’s equally at home on road or track, but also surprisingly friendly in a way that encourages you to improve your own abilities without penalising too harshly your mistakes. Feedback through the steering wheel is outstanding: you really can feel exactly the road’s surface beneath you and the car always feels hyper agile and immediate, without being nervous, while the sturdy brake pedal feel and iron-grip damping composure breed immediate confidence. Despite its enormous performance it’s surprising how quickly you grow to trust the car’s reactions, and how willing you soon are to peel back the ESP net and feel it moving around beneath you. 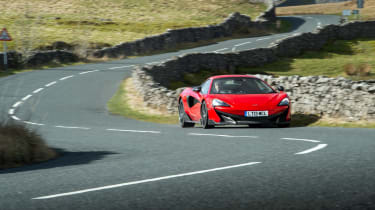 With the roof lowered, the presence of the V8 is much more obvious – and a little, perhaps, more musical. This engine will never win awards for its melody, but it’s hard not to be seduced by its aggressive snarling just over your shoulder. Even better, you can keep the roof on but lower the shallow window pane behind you with the press of another button, thereby keeping dry at all times but still have flames firing out mere inches from the back of your head. Do so and you’ll need ear drums seasoned to loud noises; the roar of the turbocharged V8 is almost painful. Even at less manic moments, a burst of acceleration has the view aft obscured slightly by a vicious heat haze from those exhausts. It’s theatre, pure and simple.

For me though, I’d still probably go for the coupe version, only because when McLaren lists all the hard work and the importance of losing every last gram of that 100kg weight saving that Long Tail specification brings, adding half of it back in again so that you can take the roof off seems to run against the basic ethos of the car. However, if you’re looking for an even more invigorating experience, they don’t come much more eye-widening than a fast drive in the 600LT Spider.

At £201,500, the 600LT Spider still occupies a slightly unusual, underdog position in the hardcore supercar market, costing some way short of a Porsche 911 GT2 RS or the Ferrari 488 Pista Aperta. As we know, its performance and all-round abilities mean it’s anything but a junior relation on the road.