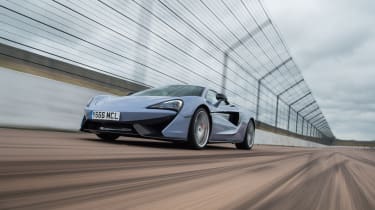 The 570S Track Pack is a lightly reworked version of McLaren’s fastest Sports Series model. It’s a little lighter than the standard car, but it’s no more powerful and there haven’t been any changes to the chassis. It’s not a stripped out, completely re-engineered circuit weapon in the manner of Porsche’s 911 GT3 RS, then.

But it doesn’t need to be. The 570S is already a very fast and capable car both on road and track, so a little less weight and one or two spec changes here and there could be all that’s needed to make the Track Pack the most exciting McLaren since the 675LT. 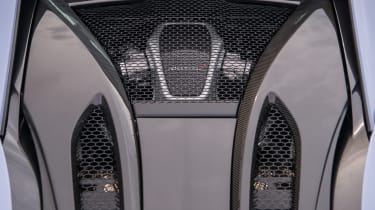 With its carbon fibre tub and standard-fit carbon ceramic brakes the 570S is already the lightest car in its class by some margin. The Track Pack saves a further 25kg, thanks to the lightweight seats and trim, as well as the attractive wheels. McLaren quotes a dry weight of 1313kg.

The rear wing, still integrated into the bodywork and unique to the Track Pack, rises 12mm higher than the item on the standard 570S. It adds 29kg of downforce at 150mph, says McLaren. 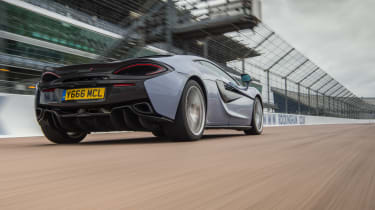 The company’s Track Telemetry system, also fitted to the 675LT and P1, allows owners to time themselves on circuit, analyse laps at the end of a session and compare times with other drivers.

Dynamically the Track Pack feels exactly like the 570S, which is to say it’s one of the most thrilling cars in the sub-£200,000 supercar category. The seating position is just about perfect and the fixed back buckets seats give supreme support in cornering, although they do make ingress to the cabin a little awkward. Drivers with larger thighs might find them too tight for comfort, too.

Full of precision and giving a very clear line of communication to the front axle the steering is among the best of any car currently on sale. There’s enough pliancy in the ride quality to iron out all but the worst that a given road surface has to offer, while body control is just about as good as it gets. 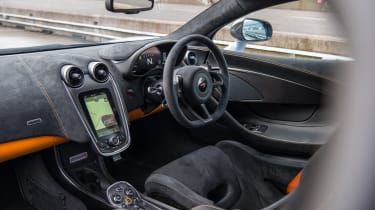 The Track Pack feels light and agile, which fills you with confidence as you thread it along a winding road. On track the Pirelli P Zero Corsa tyres find massive grip and the ceramic brakes haul the car down from three-figure speeds time and again. This car really is just as comfortable on the circuit as it is on the road.

The car’s basic chassis balance is very neutral, slipping into off-throttle oversteer on the way into a corner on circuit. That makes it fun and fast, and it means you never find yourself battling with turn-in understeer.

In third and fourth gears the car pulls with such unrelenting force that you’d swear it had much more than the posted 562bhp. You really do not need more performance than this on the road. If there is a frustration in driving the 570S Track Pack it’s the throttle response, which is laggy with anything less than 5000rpm on the rev counter and still short of the best modern turbo engines even in the upper reaches of the rev range. 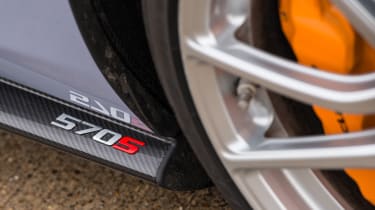 The gearbox, meanwhile, is plenty quick enough, but it too is shown up to some degree by the very best twin-clutch transmissions from Audi and Ferrari.

Far from being a focused, one-trick pony the Track Pack is actually very approachable in regular use with good long distance refinement and plenty of cabin and stowage space. It’s also enjoyable to drive at moderate speeds with its evocative seating position and tactile steering. In fact, the Track Pack is the best Sports Series McLaren yet.

The total price of the 570S Track Pack is £159,750. The aforementioned Porsche 911 GT3 RS is just as capable on circuit as the McLaren and its list price of around £130,000 makes it look like good value for money, although you’ll have to spend almost twice that to buy one today.