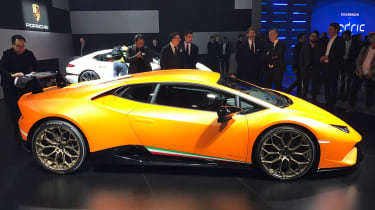 After an amazing performance around the Nurburgring last week, Lamborghini has shown off its new Huracan Performante in full before it goes on sale in the summer. The Performante is a more track-focused version of the Huracan supercar, which sits under the Aventador in Lamborghini’s range – but woe betide anyone who discounts it as the poor smaller sibling…

The Huracan Performante’s underpinnings are a hybrid of aluminium and carbonfibre, and by forging the front and rear spoilers, engine cover, rear bumper and diffuser out of composites the Performante manages to shave 40kg off the weight of the standard car.

> Read our preview of the 2017 Geneva motor show here

The engine has been tweaked, too. A 29bhp power boost means the Huracan Performante now puts out 631bhp, and torque is an impressive 443lb ft. That contributes to a 0-62mph time of just 2.9 seconds – and a 0-124mph time of an incredible 8.9 seconds.

Another walkaround video - this time it's the Nurburgring-record-breaking #Lamborghini Huracan Performante. More info...

But power and low weight alone can’t contribute to the Huracan’s incredible Nurburgring lap time of 6:52.01 – and that’s where the active aero systems come in, named ‘Aerodinamica Lamborghini Attiva’. The forged carbon front spoiler has active flaps on the top surface, while two ducts on the rear engine cover are connected to the inner channels of the rear wing.

> evo comment - 'Lambo's ring record is amazing, but the driver's the star'

When the flaps are closed, the rear wing acts as a traditional spoiler, providing vertical downforce, but when they’re open air is channelled through ridges underneath the wing to reduce drag and maximise acceleration. The ducts can even operate independently, allowing what Lamborghini calls ‘aero vectoring’ for faster cornering.

The Performante also operates a stiffer suspension setup than the standard Huracan, while 20-inch alloy wheels allow the car to run on Pirelli P Zero Corsa tyres – although the Nurburgring record was set on Trofeo R tyres. 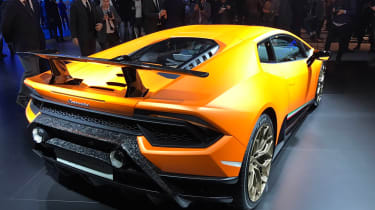 Inside, the Performante is filled with Alcantara trim and – yes – more carbon fibre. Owners can even customise their car to their own taste, though with a suggested starting price of nearly £210,000 it’s bound to make an already expensive car even more so.

Rivals are unlikely to be caught unaware however, the Ferrari 488 GTB is nearly due its own stripped out variant and McLarens upcoming Super Series supercar will give the whole segment a shakeup when it gets shown off at this year's Geneva Motor Show.