Is this the world’s greatest driving tour? 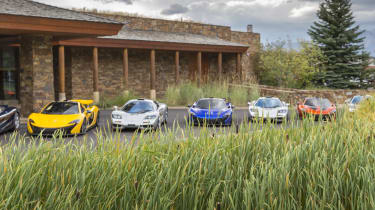 Did you know that arguably the world’s greatest, and rarest, supercar has an owners club?

The McLaren F1 owners club was set up by Ray Bellm – former GT racer, sportscar world champion, and the man who was instrumental in turning the F1 road car into a race car back in the 90s.

Bellm launched the club to bring together McLaren owners and to organise what must be the greatest driving tours in the history of the automobile. If you don’t believe us, check out the images in the gallery above.

'I started it as I felt F1 owners had no real place to use their cars in the way they want to - which is social and liberal road driving tours,' explains Bellm. 'We start in the morning, and there is a route to follow to lunch and a route home. They go as and when they like.'

'We use luxury hotels to make sure your wife or partner are happy and we plan the tours so that they are Monday arrival to Friday departure.'

Key upcoming tours are a 925km drive in Northern Spain in September 2016 for any McLaren owner, and a special event in 2017 to mark the 25th Anniversary of the F1.

Interestingly, Bellm is extending this type of tour to all McLaren owners 'at different levels of luxury' – so if you’re lucky enough to own a McLaren, be it a 12C, 650, 675LT or a P1, there will be two tours in 2017, one based in Portugal and one in Tuscany.