As the days tick down to the production P1's release, McLaren reveals a new photoshoot of the hypercar's concept 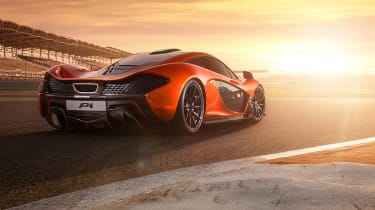 With the reveal of the production-spec McLaren P1 just weeks away, the British supercar maker (and Formula 1 constructor) has been drip-feeding pictures and information of its new model. After a glimpse inside its minimalist, carbonfibre-clad interior, we’ve now got a gallery of photographs of the P1 design concept – which the road-going car is destined to resemble closely – at the Bahrain F1 circuit during the car’s tour of the Middle East. What do we know about the P1 so far? It uses heavily revised version of the MP4-12C’s 3.8-litre twin-turbo engine, set to deliver around 750bhp, though mated to a KERS-style electric motor, total output could be as much as 850bhp. That should see the P1 comfortably top 220mph. An £800,000 price tag in anticipated. And it forgoes the McLaren F1’s famous three-seat layout… Click here for more McLaren P1 information and images, and keep your eyes on evo.co.uk as the new hypercar nears production in 2013.