McLaren F1 coming up for sale

The only McLaren F1 to be painted in Marlboro White is being auctioned off this month. Details here 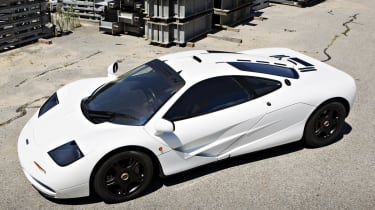 A McLaren F1 with just 1004 miles on the clock is expected to fetch as much as £8.2million when it’s auctioned off in August by Gooding and Company.

This F1 commands such a figure because of all 106 F1s built between 1992 and 1998, chassis #031 is the only one to be painted in McLaren’s Marlboro White colour. First registered in 1995, the car has passed through three owners, all of which have maintained its near flawless condition to make it one of the finest examples in the world.

Cementing this was a 2008 trip to McLaren in Woking, where the white F1 went through an extensive servicing process to give prospective owners the confidence that the car is just as it was when it first left McLaren. As you’d expect with a car of such condition, #031 will be auctioned off with its original manual, tools and fitted luggage, though the wheels have been repainted in a non standard darker colour.

Often labelled as the ultimate supercar, the McLaren F1 produces 627bhp from its BMW sourced 6-litre V12, enabling it to accelerate from 0-60mph in 3.2secs. It was the F1’s 240mph top speed that cemented it as a legend however, as well as its unconventional central driver position and exotic Formula 1 inspired construction.

The Marlboro White McLaren F1 will be auctioned in mid-August during the Monterey Car Week. This will be followed by the Pebble Beach Concours d’Elegance, where McLaren will be bringing an extreme track only version concept of the F1’s successor, the 2015 P1 GTR.