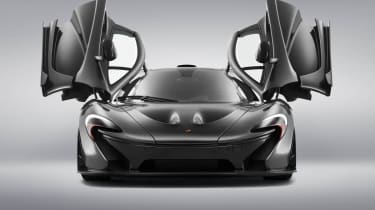 The McLaren P1 has been given the McLaren Special Operations treatment. The P1 MSO will be unveiled at the Pebble Beach show later in August. Although there are no mechanical changes, this is one distinctive example of the hybrid hypercar.

The car was commissioned by a North American customer and features a number of special touches that mark this particular P1 out from the 374 others being built by McLaren.

The Sterling Grey car boasts accents in historic McLaren Orange paint. Behind the body coloured wheels with orange brake calipers, while there are matching badges front, rear and on the side skirts ahead of the rear wheels.

The dramatic rear styling is enhanced further by the fitment of 24-carat gold heatshields around the engine bay and inconel exhaust. The gold foil is clearly visible around the exhaust and gives this P1 a stunning feature, which instantly recalls the legendary McLaren F1 supercar, which is famous for its use of gold. The material is still used today on McLaren Formula 1 cars.

When the advanced active rear wing is deployed, the McLaren Orange bands at the top of the supporting arms can be seen, an attention-grabbing feature that highlights the magnificent engineering that was implemented in creating the wing.

The changes are not exclusive to the exterior of the car, with MSO also making subtle changes to the interior. Yet more McLaren Orange accents are applied to the centre console and custom Satin Nickel-finished air vents mimic the finish found on the exhaust finisher.

While there are no mechanical changes, the P1’s drivetrain – a petrol-electric hybrid with a peak 903bhp power output and 217mph top speed – should be extraordinary enough for most buyers.

The car will be on display for the first time publicly at Pebble Beach where we will also see the McLaren P1 GTR and another McLaren 650S from MSO, pictured here in blue.

We review the McLaren P1: