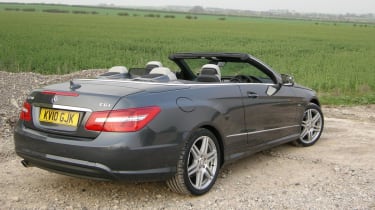 We’ve already had a brief go in an E500 Cabriolet and it failed to capture our imagination, so could it be that a lower powered model might drive more sweetly? Step forward the E250 Cabrio, which in Sport trim costs £38,110 – which strikes me as quite expensive.

It’s not exactly a highlight, but the engine is worth mentioning here, if only because it’s not what it says it is. This is becoming more and more common these days, but even so calling a car the E250 when it’s actually powered by a 1.8 is a bit rich. The turbocharged power outputs look good though, but the engine is bland and almost gutless, hamstrung by having to shift so much weight. Mercedes claims it weighs 1695kg, but it feels more like a two-tonner.

I’ve never driven a car that tries so hard to convince you you’re not driving a convertible when you have the roof down. The biggest problem is the A-pillars and header rail curve back so far over the top of your head that your peripheral vision doesn’t take in any open air. Then there’s the extensive features, all designed to keep the outdoors at arm’s length: electric mesh wind deflector, heated seats, AirScarf, AirCap. The cabin is undeniably more blustery with the systems switched off, but at motorway speeds the AirCap (basically a spoiler on the header rail with a mesh insert) does create a constant hiss like radio static.

The driving experience is disappointing, like the car just can’t be bothered to do anything apart from slouch around lethargically. The dull engine is mated to a five-speed auto and although you can shift manually if you want, the changes are too hesitant. On the plus side the body is commendably shake-resistant and the ride is composed, but there’s just no sense of enthusiasm, no feeling that the car wants to join in and have any fun.

It sits in a kind of convertible no man’s land. The E-Class Cabriolet isn’t as handsome as the Audi A5 Cabriolet and can only dream of being as good to drive as a BMW 3-Series drop-top.