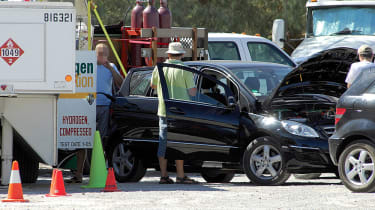 It sounds almost too good to be true, but cars which run on hydrogen fuel cells emit only water vapour into the atmosphere and in contrast to oil, hydrogen is not a fossil fuel with only limited reserves. In fact it is the most common element on the planet. Car manufacturers are seemingly uneasy about propagating this form of motive power. Research has been going on for decades and numerous breakthroughs have been announced. So far though, only a handful of prototypes and some limited series production vehicles have appeared. A fuel cell car is basically an electric vehicle since the fuel cell stack is used to combine hydrogen with atmospheric oxygen. The chemical energy from the reaction is then converted into electric power which drives the vehicle.

Matthias Brock from Daimler in Stuttgart said he believes that the fuel cell is very promising when it comes to zero-emission driving in local areas. Mercedes has around 100 test vehicles underway – the world's largest fleet of fuel cell vehicles. The company is currently working on a B-Class with fuel cell power which could be produced in limited numbers from 2010. "We estimate that between 2012 and 2015 the car could be ready for series production," Brock said. We snapped a test-fleet of hydrogen-powered B-Classes in the U.S. desert.

While other manufacturers, such as Volkswagen in Wolfsburg, are more reserved about committing themselves to future fuel cell models, the general opinion is that the fuel cell offers the only truly zero-emission drive system around. GM, for examples, states that “at the moment we cannot see an alternative."

Whether cars need to be completely emission-free is another issue. Andreas Ostermeier from the German federal environment ministry in Dessau said that the notion of zero-emissions is an irrelevance. Petrol and diesel engines no longer pose a threat to air quality. Petrol engines which comply with the Euro-5 standard laid down by the European Union use the latest technology to reduce toxins to levels far below those of even a decade ago. The same will apply to diesels when Euro 6 becomes legally binding from 2014. "Nowadays fuel consumption and a reduction in carbon dioxide emissions are at the top of the agenda," Ostermeier said.

Hydrogen is complex to produce which puts the fuel at a further disadvantage as conventional fuels continue to get cleaner. It is also an expensive fuel source as one example shows. Hydrogen can be gained by using steam to reform natural gas. "The trouble is that so much energy is used to drive the process that it is cheaper to pump the methane gas used straight into a gas-powered car," Ostermeier said. The German expert does not share the car industry's optimism that one day it will be possible to produce sufficient hydrogen using renewable energy derived from wind, biodegradable refuse and hydro generation. Ostermeier said it could take until 2030 before enough electricity from renewable sources becomes available. From an overall energy point of view it was probably better to rely until then on conventionally-powered cars, especially since the coming years are set to see the arrival of electric cars with far more efficient batteries and a wider range than those currently on the market.

In regions such as South America, bio-fuels could be the most viable alternative whereas in highly-populated urban regions in Western Europe the pure electric car offers the most potential for the future.