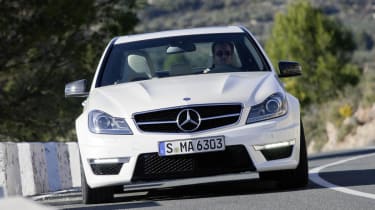 Mercedes-Benz has revealed its new C63 AMG sports saloon. The hottest C-Class has had an overhaul after four years on sale, and gets its public debut at the 2011 Geneva motor show in March. One look at the pictures will tell you it’s not an all-new model, and the 6.2-litre V8 engine remains under the front bonnet, AMG’s trick new 5.5-litre twin-turbo V8 shunned and the C63 happily remaining naturally aspirated. It produces 451bhp standard, but this can be upped to 480bhp by ticking the Performance Pack option box for an extra £5K. The C63 does get a new gearbox, though, the twin-clutch seven-speed MCT from the Mercedes SLS AMG supercar providing snappy 100 millisecond gearshifts and a Race Start function as well as lower emissions and improved fuel economy. The saloon manages 280g/km and 23.5mpg. The 0-62mph sprint can still be completed in 4.5sec, though (4.4 with the Performance Pack) while the top speed it limited to 155mph. Other dynamic tweaks include revised suspension (extra responsiveness and great ride comfort, apparently) and a tweaked power steering set up, designed to reduce fuel consumption by only using up energy when inputs are actually being made. The styling has received minor changes, too – it’s usual facelift stuff, with lights, bumpers, bonnet and alloys all being nipped’n’tucked. Make your mind up on the changes with our extensive picture gallery below. Prices will be announced when the car gets its 2011 Geneva show debut. We’d expect a very slight rise over the current car’s £54,600 kick-off point. Mercedes C63 AMG v BMW M3 saloon test