If you’re after a beautifully built, muscle-bound small estate car then look no further 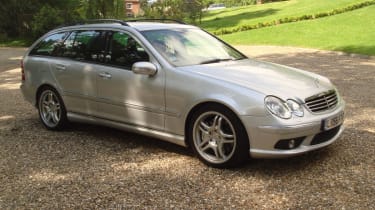 Dropping an overly large engine into an unsuspecting small car is always a good idea in our book, and this intriguing, 2007 Mercedes-Benz C55 AMG estate proves that point perfectly with its whopping 5.4-litre V8 powerplant.

The car in question was first registered as a dealer demonstrator and has only had one owner since, who used it mainly in London – hence the remarkably low mileage of just 12,850. As you’d expect, the overall condition of the car is excellent, and it’s pleasingly free of the normal scuffs and dings that life in a city can result in. In fact the only fault I can find is the slightly worn rear tyres. The car has also just been serviced, having had its last one two years and a mere 4000 miles ago.

Inside, this C55 benefits from the later design of seats, trimmed in nappa leather with Alcantara inserts, plus a 2007 model-year satnav, which has a usefully bigger screen.

To drive, this car feels very fit, with a terrific background V8 burble and instant acceleration. As with all C-class estates of this vintage, rear legroom is a little tight but, up front, the all-electric AMG seats are extremely supportive.

Thanks to its low mileage and meticulous servicing, this C55 feels spot on – I’ve even tried to think of an excuse to buy it for myself! If you’re after a beautifully built, muscle-bound small estate car then look no further – you’ve just found it.