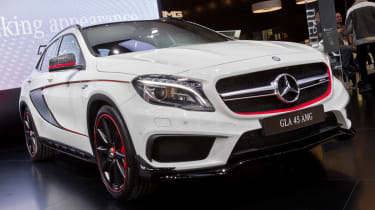 Mercedes has launched the GLA 45 AMG at the Detroit motor show. The styling of the AMG-fettled soft-roader has remained almost unchanged from the previously revealed concept car, albeit with a toned-down bodykit and paintjob. Like the A-Class and CLA, Mercedes claims that that GLA 45 has been targeted at a younger target audience, and that it is also the smallest of five SUV models now offered by AMG.

Like the A45 and CLA 45, with which the compact SUV shares most of its underpinnings, the GLA 45 AMG boasts the world’s most powerful series production four-cylinder engine. Producing 355bhp and 332lb ft from the hand-built 2-litre turbo engine, the GLA 45 can sprint from 0-62mph in 4.8secs – two tenths slower than the CLA. Top speed is electronically limited to 155mph.

Fitted with the same seven-speed DCT gearbox as its smaller sibling, the GLA45 features three driving modes: Manual, Sport and Controlled Efficiency, in which the car is capable of up to 36.7mpg and a CO2 figure of 175g/km. The four-wheel drive system can send up to 50 per cent of its torque to the rear axle, although it is primarily front-wheel drive like all Haldex-based systems.

Suspension is lowered and stiffened with thicker anti-roll bars, although there is also an option for even firmer springs and dampers. In standard form the GLA comes with 19-inch wheels, although 20s are available as an option. The bodykit is unique to the AMG too, and the new front ‘twin blade’ grille and badge also signify the car’s Affalterbach birthplace.

There are a huge amount of customisation options available, including an extra Aerodynamic package, carbon fibre package, rear spoiler and red brake callipers among others.

Mercedes claims that the decision to launch the GLA 45 was an easy one, considering that the market for mini-SUVs is currently the fastest growing area of the industry. The GLA 45 AMG is a direct rival for Audi’s RS Q3 and Porsche's upcoming Macan, but there’s currently not much else on in the mini-SUV market to match its performance.

Full spec details are yet to be finalised, with UK prices likely to be announced at the Geneva motor show in March.