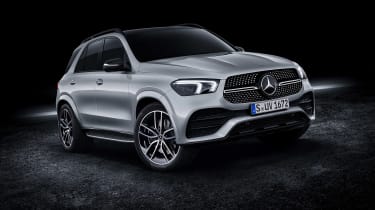 Mercedes-Benz has unveiled the latest version of its large SUV, the GLE. As well as a new range of engines, the new and bigger GLE has a sophisticated chassis and drivetrain that increases its off-road abilities while also improving its on-road manners.

The new SUV will launch in GLE 450 guise and will be powered by one of Mercedes’ new straight-six petrol engines that have electrically-driven ancillaries and an integrated electric motor. The main engine produces 362bhp and 369lb ft of torque, but is given a 22bhp and 184lb ft boost by the 48V electric motor for short periods. A diesel engine and a plug-in hybrid version will follow once the car has launched.

> Click here for our review of the new Porsche Cayenne

The GLE has Mercedes’ nine-speed automatic gearbox and 4matic all-wheel drive, no matter what engine it’s powered by. However, the basic four-wheel-drive system that distributes torque equally to both axles is only available on the future four-cylinder cars. The GLE 450, and other six- and eight-cylinder versions, will have a centrally mounted clutch pack that will be capable of sending 100 per cent of the engine’s torque to whichever axle the car thinks needs it the most – whether that’s during off-road driving or on the road to improve the car’s dynamics. For more serious off-road driving, the GLE can be equipped with a low-range transfer box, too. 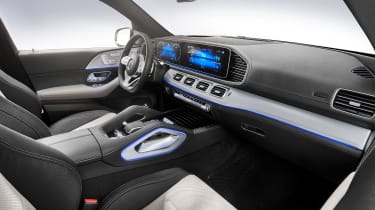 The car’s 48V electrical subsystem not only boosts the engine, but has enabled Mercedes to improve its anti-roll system. The E-Active Body Control, as it’s now called, has hydropneumatic units atop each air spring that can counter roll and pitch. A set of cameras scan the road ahead so the system can prepare the chassis for each bump and corner before the car reaches it; for example it can lean into a corner as soon as the driver turns the wheel.

As it’s E-Active Body Control is connected to the car’s 48V electrical system, it can generate power as the suspension compresses to charge the on-board battery, too.

The system can control each wheel individually so it has its benefits off road, too. If stuck, the E-Active Body Control can raise and lower the car to help rock it free or, if one wheel is bogged down without any traction and just creating drag, it can lift the wheel to help free the car. This function is controlled by the driver via the car’s main touchscreen display. 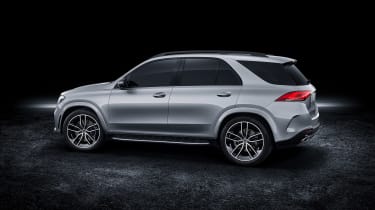 The new GLE’s interior is dominated by a huge widescreen display that stretches from behind the steering wheel, where you’d expect to find some dials, and beyond the centre of the dash. Rather than just one screen, the display is made up of two 12.3-inch screens and uses the MBUX (Mercedes-Benz User Experience) infotainment system that debuted on the latest A-class.

The more central of the two displays responds to touch commands as well as gestures from the driver and passenger individually. Different hand actions change different elements, but the cameras also keep an eye on who’s using the touchscreen, too. For example, if the massage seat function is switched on by the passenger via the screen, the car will know it isn’t the driver making the selection and will only activate the passenger’s massage chair.

The screen also has the ability to overlay navigation directions and prompts over real-life footage so that following the satnav’s guide is less vague than looking at a digital map.

Unlike the previous GLE, the new car can be had with a third row of seats, making it a seven-seater. Access for the rear-most passengers is made easier by electrically moveable second-row seats. The middle seats are also fully adjustable for comfort when not pushed forward to allow access to the rear. 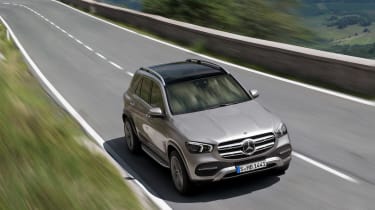 The new final row of seats is made possible by a long 2995mm wheelbase, 80mm longer than before. Despite the new length, the new car retains the wide, angled C-pillar that’s been on Merc’s large SUVs since the M-class.

To compensate for its vast size, Mercedes has focussed on the car’s aerodynamics to help improve its economy as best it can. Underbody panels to smooth out the propshaft tunnel and rear axle were developed in a wind tunnel as were its flush fuel tank cladding and the mouldings ahead of the front wheels.

All the wheels for the GLE, ranging from 18- to 22-inch in diameter, have also been designed with the help of a wind tunnel to help reduce drag.

The car pictured is in Sport trim, but the UK market will only be getting the AMG-line cars. These higher-spec GLEs are unlikely to get the same bumpers, black wheel arches or chrome brightwork.

The price of the new GLE won’t be announced until later this year when Mercedes will start taking orders. Those first cars will then be delivered early in 2019.