It's huge, it's got four-wheel drive, but what's the point? 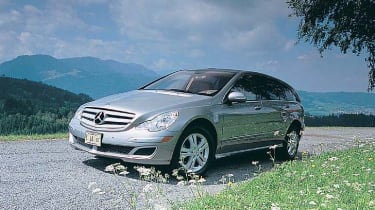 What's this mammoth device you see here? It's the new R-class, M-B's 15th unique model range. It has arisen from a 2002 concept called Vision GST, or Grand Sports Tourer. It could equally stand for Giant Sports Tourer. But what is it? Estate car? SUV? MPV?

All of the above, is the answer. Here we have the most crossed-over of crossovers, the car that can do everything provided you live somewhere spacious, like the US where the four-wheel drive R-class is made; it's an inch short of 17 feet long. Admittedly that's for the long-wheelbase version, but even the Europe-only SWB R-class busts the 16ft barrier.

The style disguises the bulk a bit, but the key to the R-class's appeal is its interior space. It's a six-seater in three rows of two, and the front four chairs give space and comfort akin to Club Class on a 747. The rearmost pair are pretty good, too, with adult-size headroom and enough leg space even for a six-footer sitting behind another six-footer. That's in the LWB version, anyway; the SWB is 235mm shorter overall so some of the R-class's USP is lost. Neither version will be able to swallow six well-heeled people's luggage, though.

Naturally, the seats slide and fold in usual MPV fashion to make a big load bay, but the centre-row seat-fold needs some strength and skill to deploy. There's an optional removable centre storage box with cupholders between these seats, matching the fixed one between the front seats, which adds to the R-class's vibe of long-distance usefulness.

These US-spec cars had softer dampers, thinner anti-roll bars and lighter steering than Euro-spec cars will have, but the two sampled engines - R350 V6 and R500 V8 - are the same. Europe will get an R320 CDI turbodiesel, too.

First off, the 306bhp V8. It's a smooth, torquey device able to haul the R500's 2240kg bulk with surprising vigour and without forever hunting up and down the seven-speed automatic transmission on difficult roads. Nor do you need to rescue it with manual gearchange intervention, which is good because the side-to-side rocker switches on the back of the steering wheel's spokes are hopeless.

The R350's engine struggles despite its ample 272bhp, and the endless gearchanges are tiresome and not always smooth. It feels a bit wieldier in corners but you're still aware of the bulk. The US-spec dampers give a good ride when you're ambling but they feel like they've covered 100,000 miles if you up the pace on a poorly-surfaced road. As for off-road driving, this isn't really in the R-class's remit despite the four-wheel drive.

So, why is it a 4x4? Because US buyers believe four-wheel drive is the only way to stay safe in a big car. And the customer, of course, is always right.