Over half a century after the original ‘Gullwing’, Mercedes has created another: the new 563bhp SLS AMG supercar 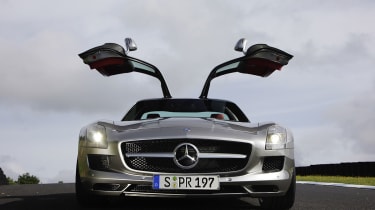 Here, in final, production-ready form, is the Mercedes-Benz SLS AMG. It’s a very surprising car, and not just for its gullwing doors. Why? Most of us thought the SLS would be a flagship of stratospheric price, carrying on where the SLR McLaren left off and doing a much better job of being a proper supercar. But at around £140,000 it will not only be a cool £110K cheaper than the SL65 AMG Black but also less expensive than even the ‘regular’ SL65 AMG, never mind a Ferrari 599. The SLS is priced to sell; it’s a properly serious project. For that money you’ll get the first road-going Mercedes ever to be entirely structured and panelled in aluminium, and a car blatantly inspired by the look of the original Gullwing, the first 300SL. All it really lacks is the hefty strakes across the tops of the wheelarches. There is no McLaren input whatsoever in the SLS. Instead it’s the first complete car engineered by M-B’s tuning arm, AMG, although the production versions will be made in the parent company’s Sindelfingen factory. The numbers (still provisional) make impressive reading: 563bhp at 6800rpm from a normally aspirated 6208cc V8, 62mph in 3.8sec, a top speed electronically limited to 197mph, and 21.4mpg on the combined-cycle test.

Despite the aluminium construction and lightweight carbon-ceramic brakes, the SLS isn’t exactly featherweight at 1620kg. But neither is it corpulent, helped by the fact that by Mercedes standards it’s quite a simple car. It has to have the ‘Comand’ multimedia system, inevitably, and it has an electric parking brake, cruise control and a three-stage ESP system, but that’s about it for techno-wizardry. The limited-slip differential is a mechanical multi‑clutch type, and the dampers are passive. This is designed to be a pure car, free of electronic fog. It would be surprising if this extended to the fitment of a manual transmission; in fact it’s no surprise to find the SLS has the latest AMG interpretation of the Mercedes 7G-tronic automatic (with paddle-shifters behind the steering wheel). It’s not, as you might have been led to believe, a double-clutch gearbox of the Porsche PDK variety, but neither does it have a torque converter. Instead it has six clutches in two packs of three, using them not only to lock and release appropriate parts of the epicyclic geartrain but also to allow the SLS to move off from standstill. This gearbox is mounted at the back, in unit with the differential, helping towards the 53 per cent of total weight borne by the rear wheels. The combined transaxle assembly is rigidly attached to the engine by a carbonfibre torque tube, which weighs just 4kg and is adapted from the C-class DTM racing car’s components. Shift modes are C (for ‘controlled efficiency’), Sport, Sport Plus and Manual, the latter three featuring an automatic throttle-blip for smooth downshifts. Shift times can be as short as 100 milliseconds from easing the torque – up to 479lb ft of it, arriving at 4750rpm – to reinstating it. There’s a Race Start, or launch control, function too.

The ESP can be switched right off, although applying the brakes reinstates the ESP Sport setting, which might prove annoying. The ASR traction control is always active, braking a spinning wheel as necessary to help get the power down. Ultimate, tyre-smoking power oversteer may prove hard to achieve. With the doors shut, what grabs you most about the way the SLS looks is the wide front air intake, very retro in its size and uprightness. Mercedes says that, from the side, the surround of the giant star recalls the intake of a jet engine. Further visual whoosh-lines appear in pairs over the exit vents at the back of the long bonnet, and on the larger vents behind each front wheel. All these motifs recall the SLR McLaren and, to a degree, the original Gullwing. A ‘6.3’ badge also appears on the front flanks, a strange figure to choose given that the SLS has a 6.2-litre engine. Paint colour choices include two matt greys. From the side, the stance isn’t quite so blatantly cabin-rearward as that of the SLR, but you’re still in no doubt that there’s a potent engine set behind the front axle line. The rounded tail is another old-Gullwing reference, but the thick rear pillars are not: the original car was much more of a glasshouse. And the doors? It’s a surprise (again) that a car can be made for sale today with doors which open exclusively upwards, for safety legislation banned them in some markets because the doors couldn’t be opened with the car inverted post-crash. Mercedes hasn’t yet revealed how the SLS overcomes this snag, but unofficial rumours suggest some form of pyrotechnic system able to release the hinges so the doors can be pulled free. Supported on gas struts, the doors open to a 70-degree angle to give a 1.5m space between the bottom of the doors and the road. There’s a wide sill to climb over, but it’s quite low at 450mm above the road. Access is a lot easier than it was in the original Gullwing. Inside, the designers and engineers have tried much harder than they did with the SLR. In place of aluminised plastic fittings are proper pieces of machined metal, and the gear selector is said to resemble the thrust regulator of a jet aeroplane. Extra carbonfibre trim panels are optional. There are just two seats, obviously, both of them with magnesium backrests to save weight, both electrically adjustable (there are some things a Mercedes buyer just won’t give up) and both with storage space behind. At the SLS’s heart, of course, is that AMG speciality: an engine likely to sound metallically thunderous. Based on the existing AMG V8 of the same capacity, known as the M156, the SLS’s unit is sufficiently modified to be re-coded M159. The intake and exhaust systems breathe more freely, revised camshaft timing and valve gear make the most of it, and lightweight forged pistons and a stronger block casting help keep it all together. Lubrication is now by a dry-sump system, which allows the engine to sit lower in the chassis in pursuit of the SLS’s low centre of gravity, and the oil pump is demand-driven rather than being powered all the time. The SLS is also a very mild hybrid, in that the alternator produces an output only when the SLS is slowing or braking.

Like the so-called spaceframe structure, the suspension’s double wishbones, steering arms and hub carriers are all aluminium. The steering should feel quick and meaty, with a high-ratio rack and a massive 11.5 degrees of castor angle resulting in strong self-centring and considerable negative camber as the outside front wheel steers. All the signs are that the SLS will be the pure drivers’ car that the SLR somehow failed to be. Might we even see it in motorsport? There are no plans yet, but there’s a major, Gullwing-shaped precedent to follow…

Later, a modified Gullwing came fourth in the 1955 Mille Miglia, and so the legend grew of a 160mph car with evil swing-axle suspension, though the truth is that the cars the well-heeled could buy weren’t quite so fast. Still very quick, though; Rob Walker, owner of the privateer Formula 1 team that bore his name, was driving one on the A3 when a chasing Mike Hawthorn, F1 world champion, ran out of luck in his tuned Jaguar.