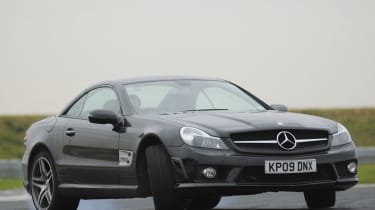 Cars should have roofs, so it stands to reason that the surest way to spoil any automobile is to remove that integral part of its body structure and call it a ‘convertible’.

The SL63 is a strange machine. A passing glance at the spec would lead you – quite wrongly it transpires – to assume that this was nothing more than a slightly uglier, less-torquey SL55 with the benefit of two extra forward gears. It’s a costly thing, too. The base car is £101,225, and with the optional Performance Pack (£8054 for an LSD, big brakes and some bling rims) plus a smattering of other toys, including a brilliant £861 keyless system, the car stands me in at £115,397. Ouch.

That’s serious money. But it is, in reality, so different to the old SL55 – and anything this side of a Ferrari California – in just about every aspect of its performance that the two cannot be compared. It has one of the great road-car powertrains. When, in 20 years time, I’m knocking about in some emasculated electro-hydrogen-thingy, I will dream about the noise this 518bhp car makes from idle to 7000rpm, even if the deliberate start-up BAAAARRP is too ostentatious for me (and my neighbours).

The seven-speed transmission is very clever too. Ostensibly, it’s a hybrid automatic/manual that locks up once under way. It’s Merc’s alternative to a double-clutch system, and I’m a big fan. It creeps in traffic far more predictably than those ’boxes and even though it doesn’t manage the same seamless shifts, it’s still crisper than any other conventional auto I’ve driven – with the added bonus of a full manual mode that uses two steering-wheel paddles.

And, in manual mode, the SL63 is a surprising drive. It steers, handles and goes quite unlike the car it replaces. As an everyday drive, it’s a fabulous all-rounder. The cabin is completely intuitive and the moment the sun comes out you can drop the hood and, well, get mincing.