The Mercedes SLS AMG supercar is turned into a hardcore GT3 racing car. We approve 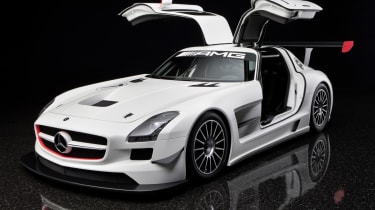 If you’re an Imperial Stormtrooper looking to go racing, then Mercedes has launched just the car for you – the SLS AMG GT3.  The most obvious changes over the road-going SLS are the wild aerodynamic additions to the bodywork. A massive splitter juts out from the new front apron, the bonnet has a huge cooling vent scooped out of it and there is a smooth underbody leading to a gaping rear diffuser. All that is dwarfed, however, by a gargantuan rear wing that is thought to be larger than some medieval banqueting tables. Of course if you think the car still looks just a bit understated, then you only need open the gull wing doors. Inside, there is a small, topless steering wheel, which is attached to a slightly quicker rack and a speed-sensitive power-assisting servo. A six-speed sequential gearbox operated by steering wheel-mounted paddles replaces the road cars’ dual clutch ‘box, but the transaxle layout remains. Power and torque outputs from the 6.2-litre V8 will be determined by the FIA on the ‘Balance of Performance’ principle that aims to create a level playing field in the GT3 class. Braking is taken care of by steel discs and a racing ABS system. It will be developed and produced by AMG in collaboration with HWA AG who run Mercede’s DTM operation and should be on sale later this year in time for the beginning of the 2011 season.