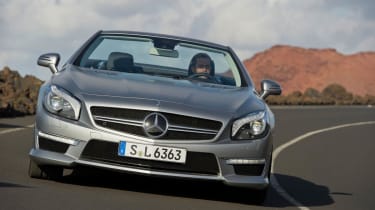 Mercedes has revealed its all-new SL63 AMG roadster. It will make its world debut at the 2012 Geneva motor show, and as usual for Merc’s performance convertible, it’s something of a tech showcase. Power comes from AMG’s now widely used 5.5-litre V8 engine, direct injection and twin-turbocharging not only increasing performance over the old SL63’s 6.2-litre naturally aspirated unit (518bhp and 464lb ft maximums rise to 530bhp and 590lb ft), but improving its efficiency too (20mpg and 328g/km morph into 28.5mpg and 231 g/km).  With an all-aluminium bodyshell (and carbonfibre bootlid), it’s a notable 125kg lighter than the outgoing SL63, weighing in at 1845kg. As well as aiding its more environmentally friendly figures, it results in a ten per cent improved power-to-weight ratio, up to 292bhp/ton. An optional AMG Performance pack ups power and torque to 557bhp and a fairly monstrous 664lb ft, enough to hustle the SL63 to 62mph in 4.2sec. The pack also lifts the electronically limited top speed from 155 to 186mph. Fuel economy is apparently unchanged.