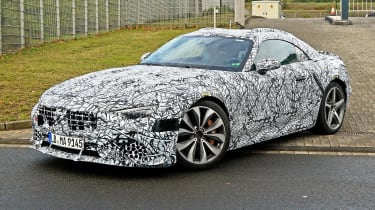 Few motoring name plates are as long standing as the Mercedes-Benz SL, and its legacy is set to continue in 2021 with an all-new model. Following official development images in August, spy photographers have now snapped a test mule out on public roads ahead of its full reveal.

The new SL will take a different path to its recent predecessors, with it due to be paired in development with the next AMG GT, and hence sharing its aluminium space frame chassis. It also means the next SL will be engineered by AMG, a first for the parent brand’s flagship roadster. This is expected to shrink its overall dimensions, and add more sporting focus to what has in recent generations become a complex and heavy two-seater. As such, this new SL is also expected to effectively replace the next GT Roadster, rather than co-exist with it as it does now.

This change of architecture is clear to see on the prototypes we’ve seen so far. The new SL’s proportions are defined by its long, low bonnet and relatively upright windscreen, with a much shorter rear deck. It will also ditch the folding metal roof that it first introduced on the R230 generation model in 2001, swapping it for a lighter and less complex fabric roof arrangement. The latest spy images don’t reveal much more, with a heavy coat of camouflage disguising its defining features. 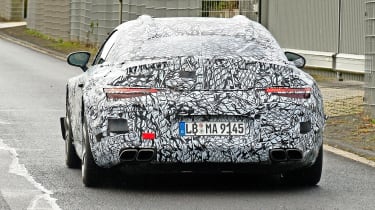 Mercedes is also expected to streamline the engine range, focusing on a combination of V8 power for high performance models, and the firm’s new straight-six petrol power units for more mainstream variants. The latter is expected to adopt the mild-hybrid systems already in use in other models. There appears to be a flagship AMG model in our photos, with telling elements like carbon ceramic brakes and trapezoidal exhaust finishers.

We still have quite a wait to see the new SL in its finished form, given it’s not expected to be revealed until mid-2021, arriving then in the UK towards the end of that year. However, it’ll be fascinating to see exactly how AMG defines the character of the new car, given its products have traditionally been much more sporting than the sort of the car the SL grew to be over the decades. Perhaps this particular  ‘Sports Leicht’ will live up to its name more than previous generations?