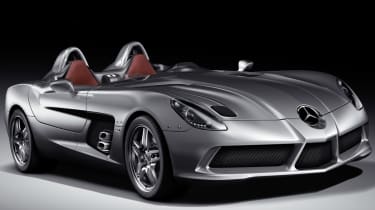 Mercedes-Benz has revealed the fifth iteration of the McLaren SLR. And it’s a bit different to the rest – this Stirling Moss edition does without a roof or windows and cranks the performance up above that of the already-quick range.

The weight is lost via shed bodywork and a host of weight-saving materials in the slightly more spartan cabin, although you do get a gearlever surround that’s engraved with Stirling Moss’s signature…

If you’re wondering about the name, the car’s styling harks back to the 1955 Mercedes 300 SLR that Mr Moss piloted to Mille Miglia glory in a record ten hours, seven minutes and 48 seconds.

A completely flat underbody, extra large rear diffuser and rear airbrake add to the heightened dose of performance, although make sure you and your passenger have a brace of helmets if you intend to fully exploit the supercharged engine’s power.

There’ll be 75 of these Stirling Moss editions made, and it signals the end of SLR production, five years after it began with the 617bhp coupe. Mercedes aimed to sell 3500 SLRs but have managed half of that so far, a year from the production line halting.

You’ll need one of the other SLR variants if you fancy your chances nabbing one of these, however, as they’re only being offered to existing McLaren Mercedes owners. Whether they’ll stump up the required 750,000 euros for the speedster is another issue altogether.