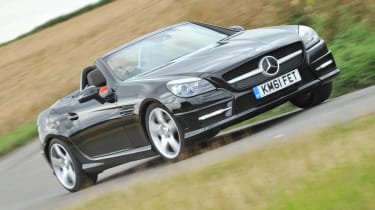 What is it? The Mercedes-Benz SLK 250 CDI, a diesel version of Merc’s folding hard-top roadster. And while oil-burning convertibles have been a staple premium manufacturer product for a number of years, this is the first two-seat, rear-drive drop-top that runs on diesel. It costs £32,255 in basic trim, or £36,255 as the AMG Sport we’ve tested here. Technical highlights? The headlines are grabbed by the SLK’s engine, a four-cylinder, 2.1-litre unit that’s used in the C-class saloon. Its 201bhp sounds underwhelming but its far healthier maximum torque figure – 368lb ft – is delivered from just 1600rpm. Tax band E CO2 emissions (132g/km) and claimed 56.5mpg look impressive alongside a 6.7sec dash to 62mph. AMG Sport trim doesn’t mean it rolls off the production line alongside SLS supercars; it’s merely a BMW M Sport-style trim line which is differentiated from standard by 18in alloy wheels and 10mm lower sports suspension. What’s it like to drive? With the rumoured BMW Z4 diesel yet to surface, has Mercedes scored an enviable first? No. That’s the impression as you turn the key and its CDI engine rattles into life. Sports cars simply shouldn’t sound like this. Once on the move, there’s not much to change your mind. With such meaty low-down torque, it’s relatively easy to overwhelm the rear tyres, particularly if the roads are greasy, but it’s not behaviour that feels natural. The SLK is a capable and tidy handler but enthusiastic driving is neither fun nor particularly rewarding. The standard 7-speed automatic gearbox is well suited to the engine, but you’ll need to be in Sport or Manual modes if you want snappy response to throttle inputs. Our test car’s ride felt very firm, and with most SLK CDI buyers likely to be seeking out a comfortable, economical cruiser, we imagine the standard suspension is the better option – especially with the base car being four grand cheaper. How does it compare? The only diesel roadster that comes to mind is the Audi TT TDI Quattro; it’s cheaper at £30,300, but less powerful (168bhp, 258lb ft) and less economical (51.4mpg, 144g/km and tax band F). It remains to be seen whether the Z4 – the SLK’s most natural rival – will get diesel power. Anything else I need to know? Enthusiastic driving saw our mpg in the mid 30s, more mixed driving around 43mpg. To its credit – and unusually in the current car market – the CDI is over two grand cheaper than its petrol 250 equivalent, so the mpg and tax savings will be felt immediately.