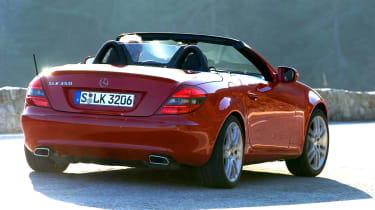 With the first-generation SLK back in 1997, Mercedes’ aim was true but its targeting system a little out of kilter. Spot-on styling and a clever folding hardtop contributed to its strong ownership appeal and more or less sealed its commercial success. Nearly half a million first and second generation SLKs have been sold to date, a remarkable 62 per cent to women. Whether the shifting automotive demographic outside ladies hair salons in those early years was because the SLK rapidly failed to gain a reputation as genuine hard driver’s sports car is a moot point. But the shortfall of chassis talent was hard to paper over. Respectably swift in a straight line with any of the larger engine options, the SLK was hung out to dry in the curves by Porsche’s mid-engined rival, the Boxster.

And, despite a partial script re-write for the next SLK in 2004 including a stiffer, re-styled body with an F1-style nose, faster roof, bigger boot and across-the-board tweaks, it has been ever since. The thumping female vote of confidence continues to be assiduously nurtured, of course, but it’s no secret that Mercedes has been itching for some payback on the ‘pure driving enjoyment’ front.

So, for 2008, comes another raft of changes – new-look nose and tail, tweaked cabin and telematics, higher gadget-count, 650 revised or new components in all – and a mild re-focusing of the range with power hikes for the 200 Kompressor and, perhaps more significantly, the 350. Significant because, now, this is the car that clearly takes the fight to the Boxster in its most potent 3.4S form without defaulting to the (hitherto) over-muscled, under-achieving, and rather costly, SLK55 AMG.

In fact, so impressively has the £35,792 350 sharpened-up, the case for spending an extra £15K for the V8-engined 55 has never looked shakier. Power from the 350’s hardly weedy 3498cc V6 has leapt 29bhp to 301bhp (10bhp more than the Boxster) and the rev limit has been raised to 7200rpm. Refreshingly, this wasn’t the work of an afternoon with a laptop but arises out of a higher compression ratio, lighter valves, deeper valve seats and new pistons. The changes give the engine an entirely different character – lustier from low revs, far keener at the top end, better to listen to – and a 0-62mph time of 5.4sec, bang on Boxster pace and barely half a second adrift of the 55.

So far so good. But it’s not the best news. That would be what Mercedes calls Direct-Steer – a variable-ratio steering rack that transforms the way the SLK changes direction. It takes a little getting used to (you tend to turn in a fraction too soon at first) but, adjustment made, you can then attack bends with a sense of verve and conviction hitherto completely alien to any SLK. Specify the sports suspension and, for a Merc, the decently positive six-speed manual ’box (98 per cent of SLKs are autos) and you have a package that at last doesn’t need to exempt itself from the acid test provided by a challenging road. No, it doesn’t have the acuity and exquisite balance of the Porsche, and the ESP you can never fully disengage is frustrating if you want to celebrate the motor’s heftier kick with a smoky tribute exiting tighter bends. But the combination of potent, sonorously scored performance and the means to deploy it with precision, control and pliancy is hugely attractive in a car that’s never wanted for style or substance. Suddenly, rather unexpectedly, the SLK is a force to be reckoned with. 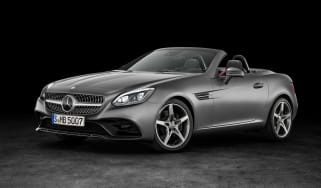 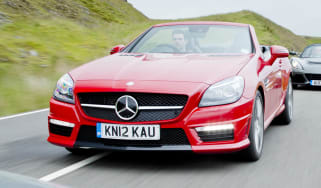 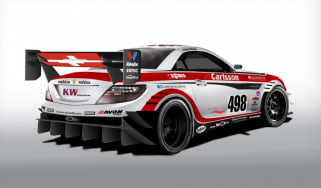 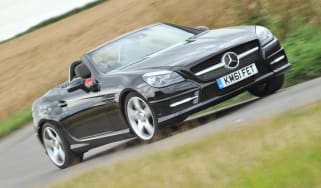 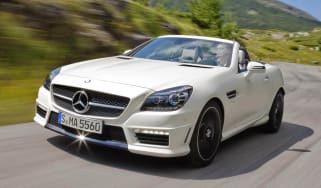 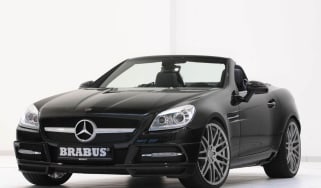 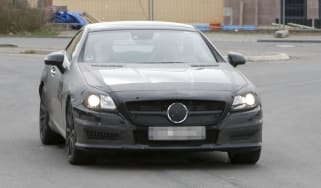 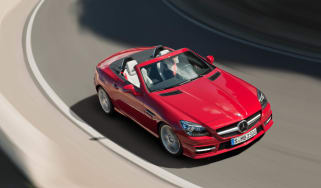 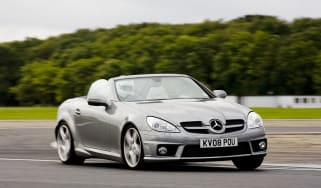 As we say farewell to our Merc, Ian Eveleigh looks back on the last 9,500 miles of ownership
Mercedes SLK 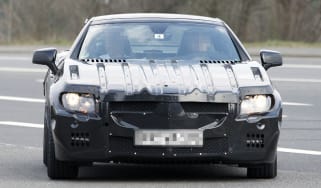 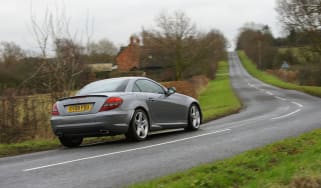 The roof stayed up as the temperature dropped, but the Mercedes still captivated the driver
Mercedes-Benz SLK350 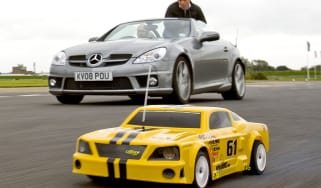 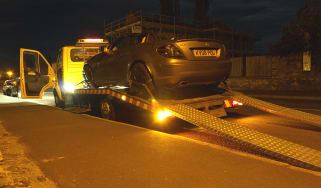 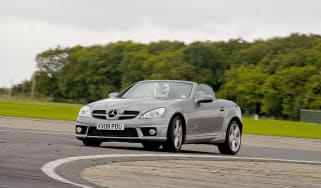 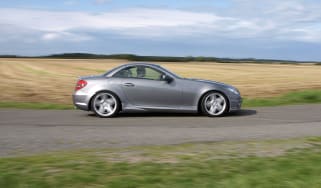 A short holiday to the Lake District proved the capability of the SLK350, but sun was in short supply...
Mercedes-Benz SLK350 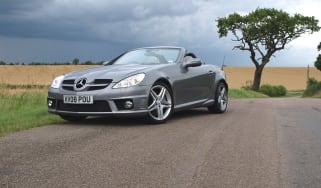 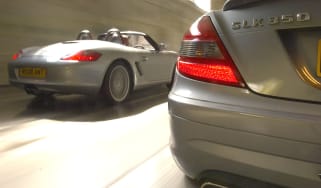 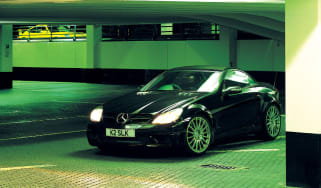 Has the SLK55 Black got what it takes to shake off Porsche’s GT3?
Mercedes-Benz SLK 280 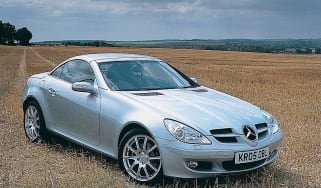 Many owners may not realise it, but this is a 'sports car'
Mercedes-Benz SLK55 AMG 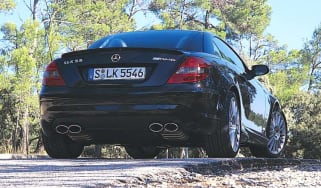 Small car, big V8, huge performance - but it's not all good news
Skip to HeaderSkip to Content