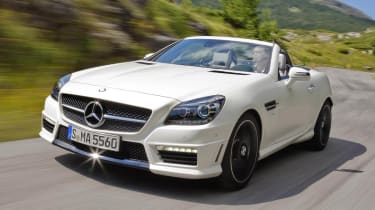 Meet the most powerful Mercedes-Benz SLK yet. It’s the new AMG iteration of the folding hard-top equipped roadster, and gets a clean and clever naturally aspirated engine. That means it mixes 416bhp and 398lb ft potency with 33.6mpg and 195g/km claimed economy figures. The latter two figures are comparable with a Renaultsport Clio 200, despite the SLK55 being over twice as powerful. The cleanliness comes despite the SLK’s 5.5-litre V8 not using turbocharging, and thanks to several bits of technology. AMG Cylinder Management shuts down cylinders two, three, five and eight under partial throttle load to save fuel, while there’s a start/stop system, direct injection, a lightweight aluminium crankcase and electronically controlled (and demand related) fuel pressure. The engine is linked to Mercedes’s Speedshift 7G-Tronic automatic gearbox (complete with a green-minded ‘Controlled Efficiency’ mode). There’s also AMG sports suspension, Torque Vectoring Brakes, and AMG Direct-Steer, which as well as apparently sharpening up steering response, also turns off power assistance when the wheel isn’t actually being turned, further improving consumption figures. As with all SLK’s, one of the car’s most striking visual features is its folding hard top roof. It converts in less than 20 seconds, and now comes with the option of the excitingly titled ‘Magic Sky Control’, a glass panel on the roof which switches from light to dark with a button-press, making the SLK’s coupe mode more versatile. There’s also Mercedes’s usual plethora of safety kit available, including Distronic Plus, Speed Limit Assist and Pre-Safe, which senses potential accidents and prepares the car and its occupants for impact. The new Mercedes SLK55 AMG will be on display at the 2011 Frankfurt motor show in September, with sales beginning in January 2012. Expect prices to kick off north of £50,000.