There was no danger of the Mercedes embarrassing itself on track… 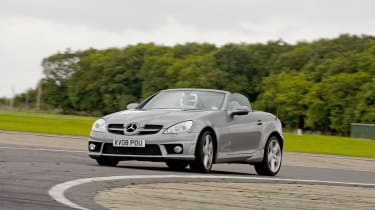 I know what you’re thinking. An SLK isn’t really made for trackdays. And you’re right, of course. But it would still be interesting, I thought, to get to know our 350’s limits a little better, and an evo trackday at the Bedford Autodrome seemed like the ideal opportunity to do just that.

The fact that it was raining when I arrived was, for once, a good thing too, because it was the Merc’s wet-weather handling that I particularly wanted to get better acquainted with. You see, while KV08’s Pirelli P Zeros offer ample grip on dry surfaces, on damp roads it’s surprisingly easy to find the rear ones relinquishing their hold quite suddenly, thanks largely to an auto gearbox that’s perhaps a little over keen – especially in Sport mode – to drop down a cog or two as you try to gently squeeze on more power for the exit of a bend.

Turns out it’s nothing to be overly concerned about. A bit of experimenting while the track was damp revealed that, if you were to be caught unawares, the Merc’s quick-witted stability systems can be relied upon to help you out sooner (if ESP is switched on) or later (if it’s in its so-called ‘off’ position), which probably explains why you don’t see too many SLK350s facing the wrong way on roundabout exits after a downpour.

Although the 7G-Tronic transmission can be unpredictable on the road, when going for a fast lap on track it’s nothing of the sort. Because you’re trying harder you’ll have already nudged it down to the lowest possible gear while braking for a corner, so there are no unexpected downchanges after the apex, meaning any slip is far more manageable. Then you just keep both hands on the wheel and leave the ’box to take care of the upchanges each time the rev-counter needle hits the red line.

The way it would pop-in a creamy-smooth upshift halfway round the fast, sweeping Palmer Curves right-hander without unsettling the car was particularly impressive, as was the 350’s pace overall, in fact. Its hard-working 301bhp 3.5-litre V6 regularly had the speedo needle pointing at 135mph by the end of the GT circuit’s long straight – the same speed Tomalin’s Impreza STI achieved there a few of months ago – and its wide tyres provided no shortage of cornering grip once the tarmac had dried out.

OK, so you wouldn’t exactly choose one over a Caterham if you were looking for a trackday toy – its steering responses are nowhere near sharp enough, the steering wheel itself feels too large and unwieldy for circuit work and the brakes soon wilt upon being asked to repeatedly bring 1465kg down from big speeds – but even after backing off a little to give the stoppers an easier time there was no danger of the SLK embarrassing itself. Out of its natural habitat it may have been, but the odd smoking disc aside, I’ve got a funny feeling that no-one knew.