As we say farewell to our Merc, Ian Eveleigh looks back on the last 9,500 miles of ownership 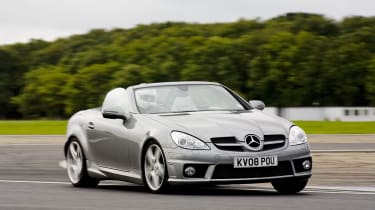 Remember how, back when you were a kid, the summers seemed to last forever? Day after long day the sun would shine; autumn, if it crossed your mind at all, would always feel like a lifetime away. What a pity summers aren’t like that anymore. Or are they? You see, after spending six months with an SLK, I’m beginning to think that our sunnier months have changed less than we think. It’s simply that, now the nine-to-five has got hold of us, we see so much less of them.

When KV08 POU arrived at the beginning of August last year, I instantly recaptured the same feeling I used to get staying out after school as the sky changed from golden orange through purply pink to dark blue, except this time it wasn’t riding my pushbike to nowhere in particular that was making warm evening air rush over my head, it was driving home in a 301bhp, 3.5-litre V6 Mercedes with the roof down.

To say the SLK350 converted me to the way of convertibles would be something of an understatement. Spending an extra hour or two exposed to the outside world nearly every day for weeks on end proved truly uplifting, and driving with a roof over my head has never been the same since. That’s not to say the Mercedes didn’t do ‘roof up’ well, though. In fact once the hard-top had been in place for a few cold, rainy days in a row, it was easy to forget that it wasn’t a permanent structure.

If you want the biggest non-AMG engine under the bonnet, the price for this most all-weather of convertibles is currently £36,000 – in theory, at least. Add a few ‘must haves’ like leather, heated seats and the virtually mandatory 7G-Tronic auto gearbox and that figure soon rises. Our car had options totalling over eleven grand on it, nearly making it a £50K SLK, and it still lacked xenons, satnav and a cup-holder.

What it did have, however, was an AMG body kit, AMG 18in alloys, and metallic grey (OK, ‘Palladium Silver’) paint. These accounted for £4405 of our car’s options, but they did give the 350 exactly the visual makeover it deserves, removing all the soft, feminine shapes on the standard car’s lower portions and replacing them with more aggressive, angular ones. In this spec the SLK certainly caught a few eyes. Those friends who didn’t insist on joking that it was still a ‘girl’s car’ were impressed too. As was I, once I’d figured out exactly what the SLK350 is.

What it isn’t is an out-and-out sports car. It may have the performance of one (0-62mph in 5.4sec), and, as I discovered at an evo trackday at the Bedford Autodrome, it may be able to hold its own on a circuit, but it doesn’t feel agile and lively, doesn’t encourage you to work it hard. Maybe it’s the car’s weight (some 1465kg), and the optional ‘sports’ suspension, as fitted to our car, certainly doesn’t help (I found the more supple standard set-up more conducive to pressing on along a tricky B-road), but the SLK350 is happiest at seven-tenths rather that being asked for everything it’s got.

It’s still a fast car, though, so even at seven-tenths you’ll be making impressive progress, you’ll just be more relaxed while you’re doing it. This was one reason why I started to think of the SLK350 less as a sports car, more as a mini-GT. There were other reasons too, like its ability to make light work of long journeys, its automatic gearbox, its decent-sized boot and the fact it could easily cover 350 miles between fill-ups.

It feels built to go the distance too, although we did suffer one problem with our SLK, when its hard-top refused to raise itself one evening, meaning the AA had to take the car away to store it somewhere secure and dry overnight. The cause of the problem is something Mercedes and I are going to have to agree to disagree on. They believe a tiny strip of cloth I’d placed in the roof mechanism to stop it rattling had forced it out of alignment; I reckon it was already out of alignment, hence why it was rattling. Whatever, as KV08 had covered over 5000 no-doubt hard-driven miles on various road tests before it arrived at Evo Towers, I think we can put it down to bad luck.

A blown number-plate bulb aside, the SLK was otherwise trouble-free during its 9500 miles with us. We didn’t even get the opportunity to put the Mercedes-Benz dealer network to the test as the KV08’s first service, due at 15,500 miles, was still nearly 700 miles off when the car went back. As such, the only money I had to spend on the Merc was on fuel, and even that wasn’t as painful as I thought it might be, a six-month average of 24.7mpg (the trip computer was a tad more optimistic) seeming quite reasonable given the size of the 350’s engine.

All in all, then, the SLK350 was a ­quite lovely thing to live with. Will I miss it? Tricky one. On a favourite road, when I really want to drive, perhaps not. But as a fast, luxurious device for getting from A-to-B on a daily basis, absolutely. And one thing is for sure: next summer won’t be half as memorable as the one I had in 2008.