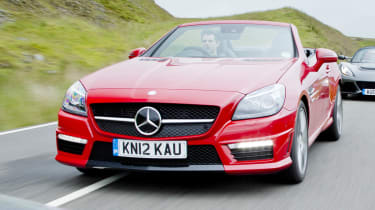 What is it?  It's getting a bit long in the tooth, but can Mercedes's SLK55 AMG, the entry point into high-performance Merc ownership, still hack it with today's best roadsters? Like the bulk of the AMG range a 5.5-litre V8 engine sits in the front driving the rear wheels; however here, it’s naturally aspirated. Prices start at £55,350. Technical highlights?  Effectively a naturally aspirated version of the 5.5-litre Bi-Turbo V8 in the Mercedes E63 et al, the engine produces 416bhp and 398lb ft, ample in something so compact and weighing 1610kg and good for a 4.6sec 0-62 time and a predictable 155mph electronically limited top speed.

The clever news is the cylinder de-activation system that allows the car to drop four cylinders at a pootle, between 800rpm and 3000rpm. This brings huge gains in efficiency and, combined with stop/start promises 30mpg at a cruise. The car itself sits lower and squatter than a standard SLK, springs and dampers are firmer and it places more rubber on the road. Our test car was fitted with the optional Handling Pack, which adds a limited-slip differential and firmer springs and dampers. What’s it like to drive?

The best way to drive the SLK55 is to hustle it without mercy. Punch it down the straights and hope that the seven-speed auto stays on its toes (an infrequent occurrence at best, it must be said), stand on the very sturdy brakes late and hard, feed the nose into turns with as little understeer as possible and jump back on the gas when the car is nearly straight again. In other words, point and squirt.

The SLK isn’t a great communicator, its steering especially disappointing. It’s numb, with a dead spot around the straight ahead that doesn’t help the pervading sense of nose-heaviness. But if you’re prepared to make allowances, there’s a kind of brutish efficiency to the way the AMG muscles through twisty road sections, using grip and (too) tautly controlled body movements to do its bidding. Effective certainly, but not all that rewarding. It’s still the straight bits that deliver the biggest blast and there aren’t many of those on this road.

Its engine strains at the leash like a Rottweiler-greyhound cross, but is hamstrung by a disgracefully dozy transmission that seems to relay the driver’s paddle-flicked wishes via a transceiver on the Moon, and overzealous traction electronics that can turn a simple sprint down a straight piece of road into a series of savage lunges defined by the available grip and bumpiness of the surface. It’s an iron fist in a rubber glove – a tech-gorged blunt instrument that, in all but its brutal soundtrack and undeniable shove, renders the business of going fast dismally remote, numb and anodyne.

How does it compare?  There’s no BMW Z4 M (yet) and the most powerful Porsche Boxster has just 311bhp, so the SLK55 AMG is more a rival to a folding hard-top equipped M3 than anything else. The BMW boasts more power (425bhp) and more torque (406lb ft) and better mpg (31 claimed). With four seats it’s less of a compromise, too, though the new car's turbocharged engine lacks the more linear powerband of the Mercedes V8. The Jaguar F-type also provides stern competition, with the basic 335bhp F-type V6 significantly down on power compared to the Merc, but its driving experience notably sharper and richer. Anything else I need to know?  This is the most fuel efficient V8 car in the world, and emitting just 195g/km of CO2, it falls into the same UK tax band as the old naturally aspirated 2.0-litre Renault Clio Cup.